Thank goodness for the Xmas holidays and a chance to get some figures onto the tabletop.

Had my first serious effort at playing Flames of War using my new Spanish Civil War armies. A fairly simple scenario to start with. The International Brigade attacking a Nationalist held village, right out of Ken Loach's film. Land and Freedom for those not familiar with his SCW film. 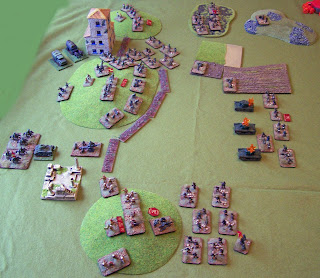 The attack started with the T26 platoon supported by infantry advancing on the centre. The aim was to pin down the fascists while the remaining infantry platoons attacked the flanks. However, the T26's were quickly knocked out by the Italian ATGs and artillery and the infantry went to ground, so offering little distraction. ﻿The right flank did reach the hill and I therefore tried out the assault rules. But the Nationalists were too strong. Heavy Machine Guns are very effective! 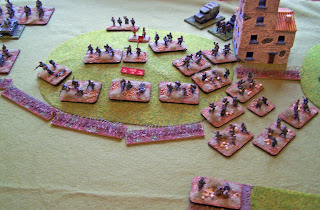 I really like the rules. The mechanisms work well, fairly simple once you work through the sections in the right order. The SCW has few of the later complications so I haven't had to tackle many of the annexes. I am playing a larger game at the club on Sunday so we will see how that goes.
Posted by Balkandave at 15:56