My painting schedule has dropped off to almost next to nothing. Work mostly, but the truth is I need to be the mood and I haven't been.

So I thought I would try some bite size filler projects, using the pile of lead awaiting the paint brush.

I have just completed the first of these, some reinforcements for my 15mm WW2 Japanese. This is a rifle squad with an attached light mortar and a couple of trucks. All from the FoW range. I particularly like their trucks, no assembly required!

I have also struggled through some related reading. 'Bloody Shambles' by Christopher Shores, tells the story of the Allied air campaign across Singapore, Malaya, Burma, Ceylon and the Philippines during World War II. It documents the Allied underestimation of Japanese ability, which led to the destruction of 50% of the British bomber force in two days.K 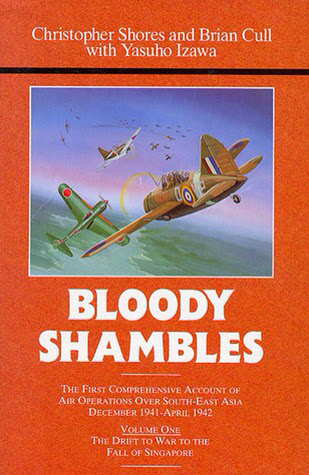 I say I struggled, more accurately I dipped in and out. I find air warfare books hard going at the best of times and this is no exception. The format is a diary of the campaigns and while I appreciate the detailed research, I'm afraid it is very easy to put down between chapters.

I have been gaming though, with a great GDWS double header and Open Day last weekend. I played in the big Bolt Action game, roughly 4,000pts a side with seven players.

This weekend I am off to York for the Vapartnak wargames show on Sunday. Looking forward to it and the Blackburn v Fulham game on the Saturday. Although a bit more trepidation about the latter!