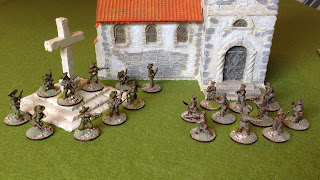 I'm off to Salute on Saturday, so I am hoping to pick up some more suitable figures for irregular units. Really looking forward to this one. I get a bit more time at the show because Fulham are playing the night before in Brighton. Possibly the furthest away game a Scottish based Fulham could possibly travel. I'm not as confident of a result on Friday as I am on Saturday!
Posted by Balkandave at 21:12