This month is the 300th anniversary of the Battle of Peterwardein in 1716. The Austrian's, led by Prince Eugene, defeated the Ottoman Turks. The Fortress of Peterwardein (Petrovaradin) is on the Danube, opposite the modern Serbian city of Novi Sad.

GDWS did a big display game of this battle at Claymore in 2006, as part of a series we called Eugene in the Balkans. With Sharp Practice 2 I thought I would dust down some of the figures and scenery.

Here is the table with part of the fortress on the left and the Ottoman siege works on the right. 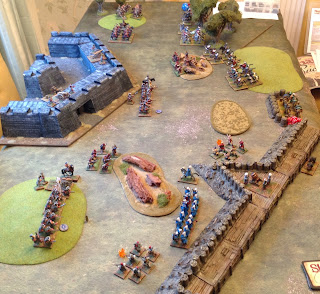 Sipahis supported by light cavalry attacking an Austrian formation in the centre. 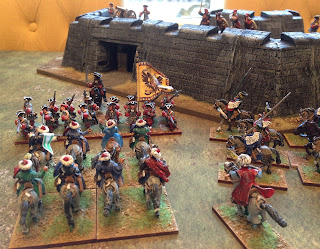 Janissaries and Arnaut skirmishers on the left engage with another Austrian infantry formation supported by Croats. 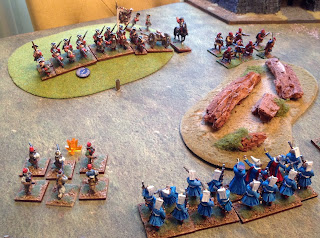 And on the right Austrian Dragoons and Croat Hussars engage more Ottoman cavalry. 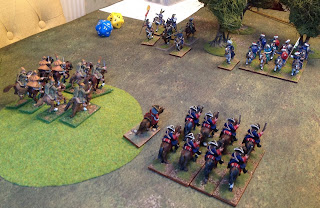 The Sipahis as impact cavalry were too strong for the Austrian dragoons, although they lost too many casualties to successfully follow up into the Croats. The Jannisaries were defeated by the Austrian foot as were the Sipahis in the centre. All this seemed about right, albeit its only one game.

How to classify Ottoman units is a challenge in most Horse and Musket rules, particularly Jannisaries. I made them regular, but not controlled volleys and aggressive as well as ignoring the no bayonets rule, because of their swords.

My army lists are set out below and I would welcome any thoughts from other players. Thanks. 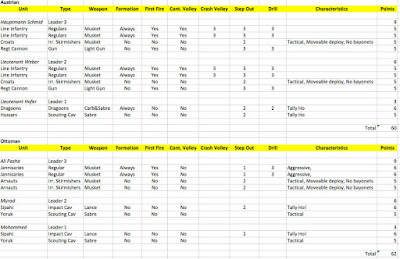 This is a link to Serbian TV coverage (starts at 3:12) of the exhibition prepared for the centenary. Nice diorama as well.