Battle of the Medak Pocket 1993

Having the week off before Easter, my usual routine is to walk in the morning accompanied by my iPod and suitable podcasts. This morning's menu included the History Network's 'Battle of the Medak Pocket 1993' written by the Canadian historian David Borys.

This isn't a Balkan battle I recalled, which isn't surprising because the Canadian Government to this day denies its existence. This is despite a Canadian unit, 2nd Battalion Princess Patricia's Canadian Light Infantry Battle Group (2PPCLI BG), being awarded the Commander-in-Chief Unit Commendation for its actions in the Medak Pocket, the first Canadian unit ever presented this unit commendation. In Canadian military circles it is described as the largest engagement involving Canadian troops since in the Korean War.

Medak is a small village, not far from Gospic in the Lika region of Croatia. In 1991 the Bosnian Serbs, with Yugoslav army support, captured the area and then ethnically cleansed the area of Croats. In 1993 the Croatian army was pushing back the Serbs and the line was held near Medak, when a ceasefire was agreed.

The Canadian Battle Group supported by French mechanised units was tasked by UNPROFOR to act as a buffer. However, when they advanced into former Serbian positions they came under artillery fire from the Croatian army. During the night the Croats sought to outflank the position, but were repulsed by the UN Battle Group. Four Canadians were wounded and the Croats suffered around 27 casualties.

The following day, the Canadian commander held a press conference in front of Croat positions, after which the Croatian forces began to withdraw to the agreed positions. In the meantime they engaged in their own ethnic cleansing of the Serb population. Their commanders were later indicted for war crimes.

The causes of the action are disputed, but there is little doubt that relations between the Croatian forces and the Canadians were not cordial. The Croatian forces did not deploy their M-84 tanks, either to avoid escalation, or over concerns about losing them to reasonably well equipped Canadian ATMs.

I have visited the region, which includes the Uskok town of Senj and the former military border town of Otocac. Most people by-pass the area on the fast E71 road to the coast at Zadar.  I didn't get as far south as Medak, although hills and woods are my memory, and apparently the area remains largely depopulated.

For wargamers, it makes a small skirmish game with unusual opponents.

The Croatian forces were a mix of units armed with former JNA weapons. They had significant artillery support  and M-84 tanks (Yugoslav version of the T-72), although these were not deployed in the action, but could be for the refight.


So, on to the tabletop. I used my 1/300 figures for the skirmish. A larger scale would be better. 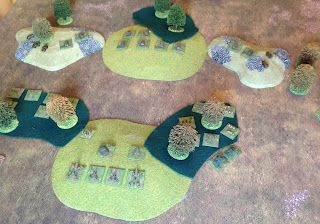 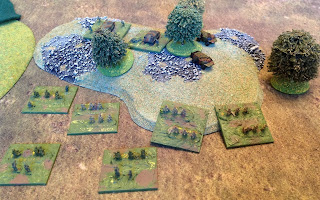 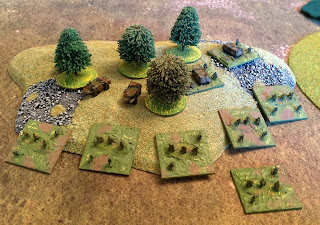