There is a bit of a theme in the books I have taken away with me on my summer holiday. They tell us about a different aspect of the Second World War. The subterfuge that accompanied many operations to mislead the enemy. Charles Cruickshank's 1979 book, 'Deception in World War II', gives an overview of many operations that played no small part in winning the war. They didn't all work, but many like 'Operation Mincemeat' did bring measurable results. 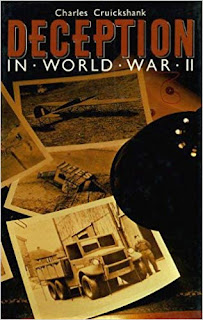 A deceptive operation embodies all the signs of a real assault. It makes the enemy believe that pretended hostile activities are genuine. It induces a false sense of danger in one area, forcing him to strengthen his defences there, and therefore to weaken them somewhere else where the real attack is due. A deceptive plan can involve many thousands of actual troops, dummy soldiers and equipment, false radio traffic, air raids, reconnaissance missions, partisan operations, diplomats and the use of double agents. They require meticulous planning because just one slip can reveal the deception.

The author studied a wide range of operations from the desert war to D-Day in 1944. Some are tactical deceptions, deployed by army commanders. Others are strategic deceptions, which aimed to convince the Axis that an invasion was going to happen somewhere else.

The British were the main adopters of deception. The Germans consistently overestimated the British order of battle throughout the war. The Americans were sceptical until later the war when they had seen the practical results. The Germans made some use of deception in their offensive operations, in Poland, and most successfully in Operation Barbarossa. However, by the end of 1942, they were on the defensive and had less use for the technique. The Japanese attack on Pearl Harbour was a highly successful deception, but again after that, they were on the defensive.

I was of course particularly interested in the deception operations that involved the Balkans. I have already covered the 1943 Operation Barclay plan to simulate an attack on the Balkans rather than Sicily, of which Operation Mincemeat was just one part. In 1944, the Balkans were again used to distract the Germans from the beaches of Normandy.

This was Operation Zeppelin, which involved attacks on the Peloponnese, Crete and Albania. This time involving a beefed up 12th Army, which included five real divisions, three brigades masquerading as divisions and four fictitious divisions. The main base was Tobruk, which had real and dummy landing craft.

Efforts were also made to get Turkey to join the war, or at least convince the Germans and the Bulgarians that this was a possibility. Operation Hardihood, a 1943 plan to provide substantial military aid to Turkey was dusted down, but in the end, existing German apprehensions were enough.

Probably the best known deception plan of the war was Fortitude. This involved General Patton's fictitious army group in Kent, which was intended to convince the Germans that Calais was the main landing on D-Day with Normandy simply a diversion. This was very successful, although even modest German reconnaissance would have undone the deception.

Norway was used on several occasions for deception operations, tying down German divisions. Perhaps less well known was a plan to invade Spain. I wasn't aware that the Chiefs of Staff gave serious consideration to invading Europe via Spain in 1943. The Pyrenees might have been a bit of a problem, but I suppose Wellington managed it!

One reason for British success in deception was the use of around 120 double agents in Britain who fed duff information to the Germans throughout the war. They also had the benefit of Ultra which confirmed, or otherwise, the success on deception operations. It is important to recognise that not all operations were successful. There was also significant resistance to using real assets in support of these operations - not least from Bomber Harris.

Overall, they played an important role, particularly in Operation Overlord. The deceptionists were the second class citizens of the armed forces, making use of limited resources. They deserve some credit, and this book at least highlights their part in winning WW2.