This is the latest in my re-reading of Nigel Tranter's historical novels. It covers the period of Alexander III's minority, as told through the eyes of his supporter, David de Lindsay. It is a common Tranter ploy to tell the story through a close associate, although on this occasion, he chose an actual historical figure, albeit a lesser-known one. 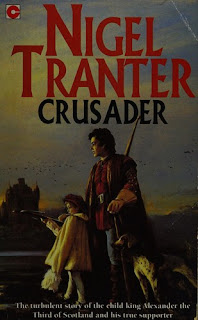 Alexander III was born in 1241 and became king after his father's death in 1249. At the age of seven, he had regents appointed by Parliament. This was a source of a continuous power struggle between the faction led by Walter Comyn, Earl of Menteith, the other by Alan Durward, Earl of Atholl. Relations with England were, as usual, challenging, with Henry III attempting to assert his paramountcy. Alexander was married to Henry's daughter, Margaret, in 1251.

Alexander's father had died while preparing to campaign against Norway to control the Western Isles, an issue that Alexander would resolve much later in his reign. However, his regency period was mostly an issue of internal politics, with the factions vying for control.

David de Lindsay is officially the King's cupbearer but acts as a sort of advisor and tutor in practice. He later became Chamberlain of Scotland. While this is all very worthy, it has to be said that it doesn't make a page-turning read. Most of the action occurs in Lothian and the Borders, Tranter's home turf, so there is plenty of Tranter's descriptive writing of the region and lordly pursuits, but not a lot else.

The book's title, Crusader, is a bit disingenuous. David de Lindsay promises his mother that he will go on crusade,  and he puts this off until Alexander achieves his majority. This was late in the crusading story with King Louis of France's failed Seventh Crusade, following the Battles of Mansura and Fariskur in 1250. With no actual crusade to join, David goes to Acre, where he dies of disease during one of the many sieges of that crusader outpost. That part of the story is simply a short epilogue.

So, an interesting period piece, but not one of Tranter's more gripping stories, and certainly short on action.