Nationalists finally off the bench. Mostly a rebasing job as I picked up a job lot at a bring and buy over a year ago. Supplemented by more figures from Peter Pig. I have plenty of Italians so I don't need that many Spaniards.

The core of the Nationalist army was the African Army stationed in Spanish Morroco. Apart from the Moors there was the Spanish Foreign Legion that actually only allowed 10% of foreigners in its personnel. A number of regulars joined the Nationalists to strengthen these well trained regular troops.

The Nationalists could also call upon two groups of militia. The Carlists based in Navarre, strong monarchists who opposed any form of democracy and the Fascist Falange.

So, first we have regular Nationalist infantry: 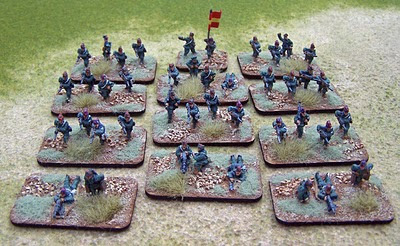 and then the Carlists in their distinct red caps﻿.