I was itching to get 'Blucher' on the tabletop once the package arrived in the post. The rule book is beautifully produced and seems very robust with the all important quality stiching. There is very little gratuitous eye candy, the graphics are there to explain the mechanisms. There are helpful summaries and examples of play in every section. The Hundred Days cards, an optional extra, are also very nice.

As recommended, I played the first game with cards rather than miniatures. Nine units a side, with the British defending the classic ridge and the French attacking. You start with the cards face down. 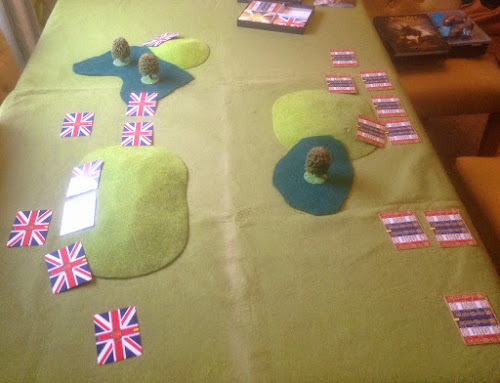 There is scope for strategic movement, called reserve moves, but otherwise you activate Corps, individual units or finally the CinC activation. Each activation costs Momentum Dice which unusually are rolled by your opponent and kept secret from you until they run out. The incentive is to do the essentials first.

Movement is by base widths, so the rules will work with any consistent basing, and are reduced to two speeds simple and difficult. A simple move is a pivot and then straight ahead, reminded me a bit of Spearhead. Difficult can be due to terrain or a pivot at the end of a move. The size of the cards and the engagement restrictions make it difficult to do any fancy manoeuvring when close to the enemy.

Fire and combat phases use a simple mechanism. It depends on the strength of the unit and a few bonuses and special rules. This is very much a game of attrition and reserves are important. Here you can see the French advancing and first cavalry clash on the British right. I used casualty markers rather than mark the cards. 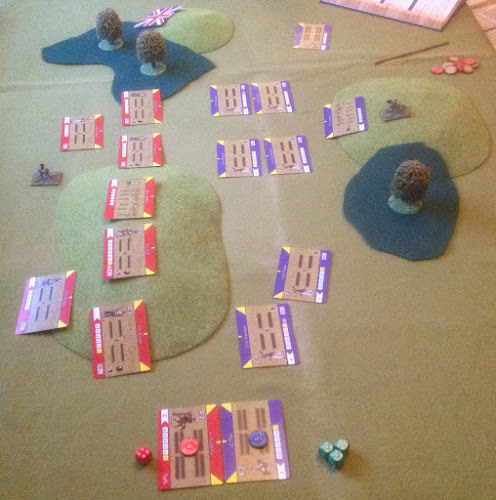 Units retreat a couple of base widths if they lose a combat, but can come back if you want. You don't get long melees over several turns.

Anyway, the French pinned the British right with skirmishing and put their main effort on the left. The game ended with the French making a breakthrough. 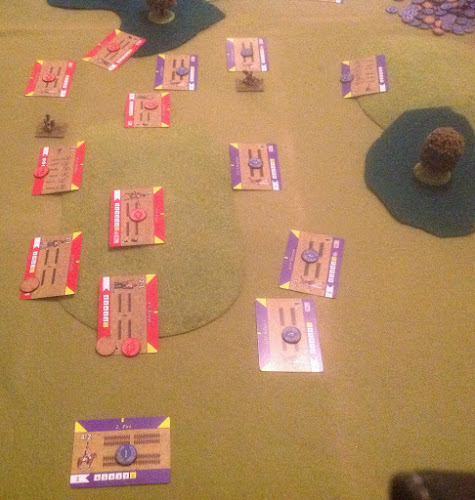 There are most of the army lists you will need in the book, together with a campaign system and advanced rules. There are also some useful additional resources on the web site, including blank cards.

It's important to emphasise that this is a grand tactical level game. Small unit tactics are abstracted out. So it's not a replacement for say Black Powder. This is a big battle set of rules. Each card or base of miniatures represents 4 to 6 battalions or 2 to 4 batteries.

My initial reaction is very favourable. I play a lot of different games, so I favour simple mechanisms that allow you to focus on the game rather than the fine points of the rules. I anticipate dusting down my 15mm armies that haven't seen much action since I regularly played Principles of War.