Something a bit different in terms of World War Two memoirs.

Richard Harvey served in the 1st East Riding Yeomandry, a Yorkshire regiment based in Hull. The regiment was part of the British Expeditionary Force that went to France in 1940. They were equipped with Vickers Mark VI light tanks and armoured scout carriers. Harvey was a Bren gunner and wireless operator in the troop commander's carrier. 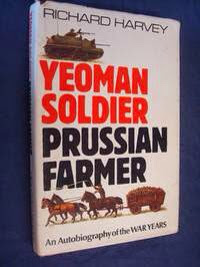 His unit was part of the fighting withdrawal to Dunkirk, but he was wounded and captured. He ended up in Prussia near the old Teutonic Knights castle at Marienburg.

They were billeted in a farm workers bothy and worked on a German farm. Getting out of the Bothy wasn't that difficult and they did it many times, but without an escape committee they had no access to the necessary paperwork and other resources needed to escape across Germany. He spent three years at the farm and was then sent to Stalag XXB, before ending up in a sugar factory. As the Russian's advanced they were evacuated with the civilians and nearly got killed by allied ground attack aircraft. Eventually they were liberated by the advancing American units, and sent back to Hull.

A short, but interesting read that inspired me to finish another short paint job. This time a couple of German 105mm howitzers for my early war German FoW army. 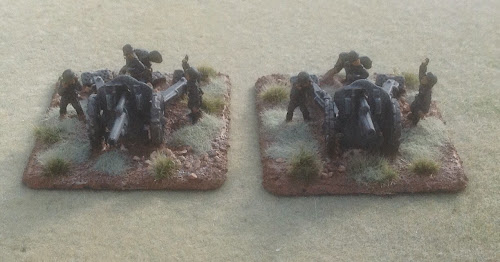