The Wars of the Roses has never been a period of great interest to me. Perhaps being born in Lancashire, but married to a Yorkshire woman, has meant that this is a subject best avoided! In wargaming terms the serried ranks of archers and plate armed foot lumbering towards each other for a slog fest, has also never appealed.

However, it is certainly in fashion at present. Dan Jones's book looks interesting, but I was drawn in by Conn Iggulden's series of historical novels, staring with Stormbird. 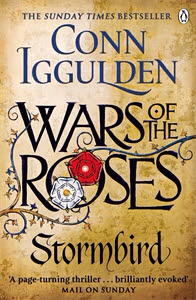 He starts in 1437, when Henry VI, the Lamb, accedes to the English throne after years of regency. As the name suggests, he was not a chip of the old block of his father Henry V, hero of Agincourt. His poor health and frailty of mind render him a weakling king, relying on his closest men, Spymaster Derry Brewer and William de la Pole, Duke of Suffolk. Others, such as the Plantagenet Richard, Duke of York, believe England must be led by a strong king if she is to survive.

Iggulden is of course a first rate writer and this is classic historical fiction. Well researched, plenty of action, and numerous sub plots. I doubt if it will make the period any more attractive to me in wargaming terms, but it's a great read.