Greece: The Decade of War

My holiday non-fiction read was appropriately, as I was in the country, 'Greece, The Decade of War' by David Brewer. This is a new book by the author of a very good study of the Greek War of Independence, 'The Flame of Freedom'. 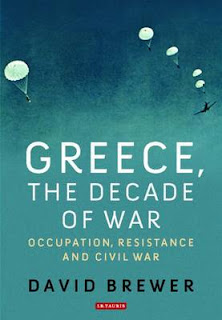 In this volume he covers the period from Mussolini's occupation of Albania in 1939, to the end of civil war in 1949.

The Italian and German invasions are covered briefly, with the focus during the war years on the period of occupation. This is the right balance as there are several good books on the battle for Greece, but less on what happened during the occupation itself. The chapters cover the various resistance movements and support from SOE, as well as the impact of occupation on the people of Greece. These were tough years, accompanied by food shortages and savage reprisals for acts of resistance.

The communist ELAS were the most effective resistance movement, although as elsewhere in the Balkans, they had one eye on the end of the war. The final chapters of the book cover the civil war that started when the Germans withdrew. The attempts to broker a peace agreement that failed, leading to a shooting war. ELAS was always heavily outnumbered and probably made a strategic mistake when they moved from a guerrilla to conventional war plan. Stalin showed no interest in a communist takeover and eventually the loss of safe bases in Yugoslavia, Albania and Bulgaria sealed the defeat of ELAS.

This is a very readable and well written study of the whole period. Recommended.