Osprey had a bit of a Balkan splurge prior to xmas, providing me with a pile of holiday reading.

I started with World War II Croatian Legionaries by Vladimir Brnardic. You might think the Croatians have had quite a bit of coverage, but this title is about Croatian troops who served under Axis command, not those who served in the Croatian defence force or the Ustasha militia. 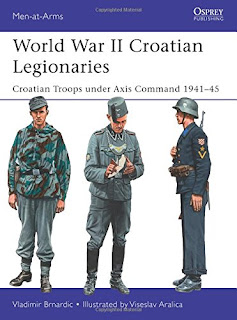 These Croatian's were literally under Axis command, with almost all the officers and many of the NCOs being German, or at least ethnic Germans who lived outside the Reich. It started with the Croatian legion, the 369th Reinforced Infantry Regiment and then grew into three infantry divisions - 369th, 373rd and 392nd. They also provided significant troops for the Waffen-SS divisions - 13th Handschar and 23rd Kama mountain divisions.

Even the Italians got in on the act. The Croatian state, somewhat reluctantly, provided troops for the Italian-Croatian Legion, a light motorised battalion.

The author takes us through the service history of each unit. The focus of their service was against the Partisans in Yugoslavia, but several also fought on the Eastern Front. The 369th Infantry Regiment was destroyed at Stalingrad and the Italian Legion was completely wiped out on the Chir River line in December 1942.

Being an Osprey book, there are photo-realistic colour plates by Viseslav Aralica and lots of period photographs. The Croatian's wore German and Italian uniforms, with the main distinguishing feature being the distinctive Croatian red and white chequered badge. Wargamers can therefore use axis models and just paint the badge on. Not easy, but someone may do a transfer. Warlord do Fez capped heads for the Handschar division (see below from my collection).