With SOE in Greece

My latest reading has covered the wartime experiences of Captain Pat Evans, written up by his son Tom. Pat Evans served with the Special Operations Executive and his main operational duties were in Greece, or to be more accurate Western Greek Macedonia or Epirus. As current events show, names matter in this part of the world! 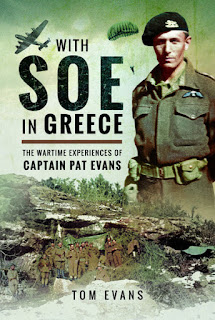 The role of SOE was to create as much trouble as possible for the occupation forces, or in the words of Winston Churchill to, "set occupied Europe ablaze". This meant operations with his own team and supporting local resistance forces. In Greece, the most effective resistance force was the communist controlled ELAS, which was just as focused on fighting the right-wing nationalist group EDES as the Germans. Added to the mix in Macedonia, were Tito's partisans and various Macedonian groups. Political minefield does not begin to describe his role!

The author has relied on his father's papers and letters as well as the national and Liddle Hart archives. Supplemented by interviews with those still alive.

Pat Evans was based in the Mount Pindus area, which had seen heavy fighting during the Italian invasion. In the civil war that followed the liberation, the mountain villages which supported the SOE forces were largely destroyed by government forces, supported by the USA.

I have traveled a bit around this region and visited a few of the places mentioned in the book. It is ideal territory for guerrilla operations and the Germans never succeeded in destroying the SOE team. The author has done a good job knitting together the sources into a very readable story. Even by SOE standards, this was a tough posting.