Death on the Don

Death on the Don by Jonathan Trigg chronicles the destruction of Germany's allies on the Eastern Front during WW2. 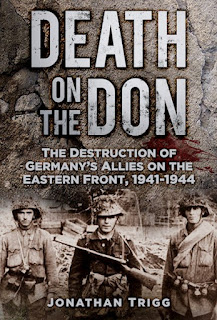 With the exception of Italy's contribution, this is mostly the story of Hitler's Balkan allies; Romania, Hungary, Bulgaria and the puppet Croatian state. The author outlines the reasons these states were drawn into the Axis and while their limited economies were ill-equipped for modern war, they did provide important raw materials to the German war machine. Bulgaria kept out of the invasion, limiting their contribution to security duties in Yugoslavia.

Operation Barbarossa was a massive undertaking for the German army and the Balkan states provided much-needed manpower, even if they lacked modern equipment, particularly tanks. The Czech built Panzer 38(T) was the ubiquitous tank of these armies, supplemented with French R35's - all of which would be outclassed by Russian armour.

After the failure to capture Moscow, Hitler decided to turn south in Case Blue. This involved several Romanian, Hungarian and Italian armies and led to the Don River and Stalingrad. They mostly came under Army Group B, commanded by a General with possibly the longest name I have ever seen - Maximillian Maria Joseph Karl Gabriel Lamoral Reichsfreiherr von Weichs zu Glon!

As Von Paulus's 6th Army was sucked into Stalingrad it was the allies who protected his flanks. The problem was that the allied divisions were thinly stretched with limited reserves. The main front line was little more than widely dispersed foxholes with few anti-tank guns. Divisions on paper had been reduced to binary two regiment formations and even these were well below establishment. Supplies were also limited, with inadequate winter clothing and food.

Despite these shortcomings, many units fought much better than popular myth would have it. There was stubborn resistance from many units and counter-attacks by the armoured units. However, in the end, the Russian steamroller broke through and surrounded Stalingrad.

The cost in men and material was enormous for the small countries concerned. Few prisoners survived the Soviet POW camps, although the author reminds us that Soviet prisoners fared no better and the treatment of Jews and other minorities in these countries was appalling. What remained of the armed forces disintegrated and had to be withdrawn from the zone of operations. Some did regroup and took part in the defence of their countries from the Soviets before they surrendered.

This book describes military folly and tragedy. It also describes great bravery and personal sacrifice. The story is well told and shows a more complex picture of the allied armies.

For the wargamer, most of the armies are available in the popular scales. Great Escape Games have brought out Italians in winter uniforms. Warlord are currently promoting their new Hungarian range.

I have a small Romanian force in 15mm, which hasn't seen the light of day for a while. The new edition of Blitzkrieg Commander might be a good excuse if I can find them. I don't have any Hungarians, other than this rather nice 15mm armoured car. 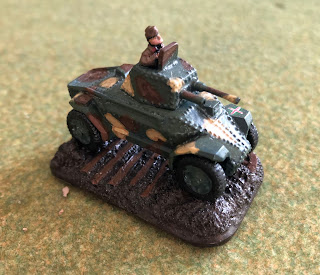