The next stage in my Soviet Bolt Action force, to take on the late-war Hungarians, was a choice of AFV. I was tempted to repaint a spare Sherman, as the Soviet Southern Front armies had a lot of Lend-Lease kit. However, the model I picked up appears to be a little on the large size. The ubiquitous T34 was an obvious choice, but I fancied something different and decided on the SU-100.

The SU-100 was the next stage in the development of Soviet tank destroyers after the SU-85 was struggling to match the latest German designs, particularly the Panther. The 100mm D-10S gun could penetrate even the front armour of the Panther at a range of 1500m. It also had thicker armour and a better commander workspace.

Mass production began in September 1944 and it was used in large numbers in Hungary, another good reason for my choice of AFV. Over 2300 were built by the end of the war and it continued in service for many years in both Soviet and other armies around the world. Most recently one was spotted in the Yemen conflict.

On to the model. I have decided that 3D printing is the way forward for guns and vehicles. This model is from Butlers Printed Models. It comes in one piece, no messing about and hardly any flash. This photo is straight out of the box.

Like most Soviet AFVs, this isn't a complex paint job. A primer spray and some dry brushing produces a decent outcome. I have looked a lot of pictures and some SU-100's have no markings, others just a number and others a red star. I had a spare red star in the transfer box, so that's it. Just a matt varnish spray and it is ready for the tabletop. 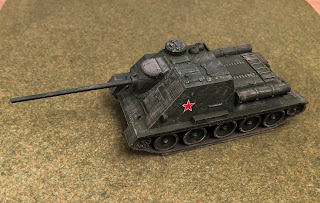 I'm assured Santa is bringing the infantry for Xmas!
Posted by Balkandave at 07:00