I was in urgent need of some distraction this weekend. For those reading this from outside the UK, the country has justed voted for a buffoon as Prime Minister. It is at times like this that the hobby brings some much-needed therapy.

So, I looked at the lead mountain and Soviet artillery seemed somehow appropriate. With some of Henry Hyde's excellent Patreon podcasts as background, paint was applied.

When we think of Soviet armies in WW2, we tend to focus on T34 tanks and serried rows of infantry. However, it was artillery that the Soviet commanders called 'The God of War'. Unlike other armies, the Soviets used their artillery more in the direct fire mode. Not least because lower educational standards made it difficult to recruit forward observers. For the Bolt Action tabletop game, bigger guns are also not really appropriate. Not that it stops some gamers deploying Nebelwerfers!

I started with the ubiquitous 76mm ZIS-3 Field Gun, the mainstay of divisional artillery in WW2. A staggering 103,000 of these guns were produced. This is a Butlers 3D printed model. I have decided that 3D printing is the way to go for guns and tanks in 28mm. I am fed up with poorly designed kits, inadequate instructions and superglued fingers. These models may lack a bit of detail, but they are robust, and most importantly, come in one piece. There is a bit of flash, but this is just pulled off with plyers. I couldn't find anyone who sold stand-alone gun crew, so I had to adapt some mortar crew. 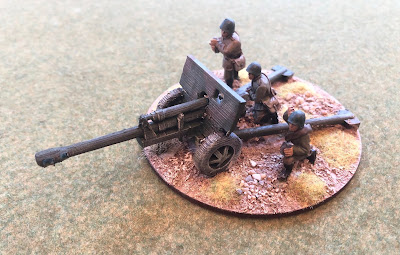 Then I needed an ATG. These are later war Soviets that will take on my Hungarians, but I wanted a manageable piece for the tabletop. I, therefore, went for the 57mm M1943 ZiS-2. Some 10,000 of these effective ATGs were produced, which could penetrate the armour of late German tanks, including the Panther and Tiger. They were still being used in Africa in the 1990s. 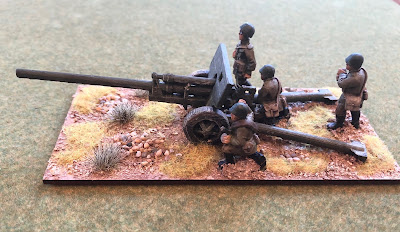 Therapy over for now, but still plenty more Soviets to paint!