Rebels on the Niagara

This is a book by Lawrence Cline that I picked up on my visit to Canada last year. It covers the Fenian Brotherhood's invasion of Canada in 1866. There was a further effort in 1870, which together make up the last invasion of Canada.

The Fenian Brotherhood was a large membership organisation in the USA, largely made up of recent immigrants and those of Irish descent, committed to supporting Irish independence. After the American Civil War, a significant number of Irish Americans had gained military experience and the Brotherhood decided that this could be put to good use with an invasion of Canada to put pressure on the British Empire. At this time Canada had not become the confederation it is today, and the colonies were organised separately.

The book explains the various debates that took place amongst the organisation, which resulted in splits and some disorganisation, as well as a shortage of funds to finance the invasion. Whilst they had significant political support in Congress and elsewhere, which chased the Irish vote, the US government was not supportive. Diplomatic relations, which had been strained during the Civil War, was fairly positive.

Gathering weapons was not a huge problem in the USA given the gun ownership laws and culture. This didn't stop the US authorities from making some efforts to impound weapons. Both sides gathered intelligence, both in Canada and the USA. The Brotherhood was infiltrated by spies and even in the USA, it is difficult to hide gatherings and drilling of armed men. The actual movement of troops is even more difficult to hide, not that many of the participants made much effort when it came to security. Trains bound for the border were full of men drinking, singing Fenian fight songs, bragging and generally showing little concern for security.

The Fenian strategy was, to put it mildly, ambitious. They planned multiple incursions, an approach that well-trained armies of the period would have found challenging.  Communication problems were exacerbated by no access to the telegraph or railway systems. Little attention was paid to logistics, hoping to live off the land, which given the military experience of the commanders, seems very strange. It is important to emphasise that the plan was to seize and hold territory, not simply to raid.

The main attack was in the Niagara area and had some early success at the 'Battle' of Ridgeway when the Canadian militia launched a premature attack on the Fenian forces. Really just a skirmish with casualties on either side in single figures. However, as the colonial authorities got their act together, and the promised Fenian reinforcements failed to arrive, they decided to fall back on the disused Fort Erie. The remaining force was evacuated by ship, only to be captured and arrested by the US authorities. A further invasion was tried in 1870, this time in Quebec province. It was halted by a better prepared Canadian militia at Eccles Hill.

While the invasion had a minimal impact on Irish independence, it was a factor in driving the confederation of Canada in 1867.

This is an interesting story but I think I can manage to avoid an outbreak of wargamers disease over this campaign. There is a board game from Last Legion if you are so minded.

A few pictures of Fort Erie as it is preserved today. 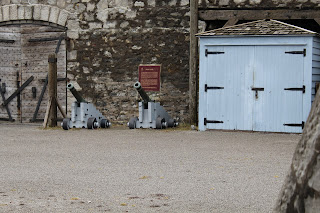 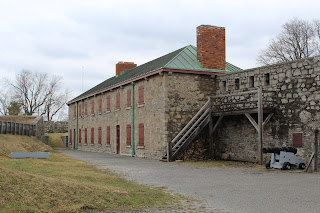 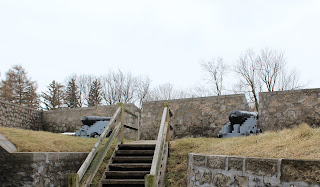