This is the first of series of historical novels by Christopher Nicole based in Yugoslavia during the German invasion in 1941. Needless to say, I am an obvious customer for WW2 fiction in the Balkans, although I haven't come across this fairly prolific author before. 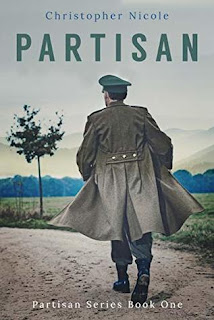 Our hero is a British army captain serving in the British embassy in Belgrade after being wounded in France. He has a Croatian girlfriend whose best friend is a French journalist working for a news agency. The book starts with the March 1941 coup, which deposed the Regent (Prince Paul) and replaced him with the young King Peter. Hitler ordered an immediate invasion, which started with a terror bombing of Belgrade.

The three friends leave Belgrade and head for the hills. Even allowing for the scope of historical fiction they manage to meet the main three Yugoslav players of the period in their travels. I can live with that because it does allow the author to explore the internal conflicts that wracked Yugoslavia before and during the war.

I don't want to be over picky, but the author's research could have been a bit more thorough. For example, accession to the Tripartite Pact in Yugoslavia's case did not require the passage of German troops. In fact, Hitler's negotiating aims were simply to neutralise Yugoslavia while he dealt with Greece and secure vital raw materials. Also, King Alexander was not assassinated by a Croat. He was shot by a Bulgarian member of IMRO, who was trained by the Croatian fascist Ustase in Italy.

Meeting Draza Mihailovic just after they escaped the bombing of Belgrade (6 April) was some achievement as historically he didn't return to Serbia until 29 April. I can live with that fiction but to describe him as the 'Chief of the Yugoslav General Staff' is just factually incorrect. Mihailovic was an assistant to the Chief of Staff of the 2nd Army in Northern Bosnia at the time of the invasion. Very much out of favour, not least because he attended an event at the British embassy - so at least that bit is right.

By now you will have guessed that the third key figure our group meets is Tito. The attack on Uzice used in the book actually happened many months later. Tito was in Belgrade during the period covered by the book, so this is less of a stretch. The meeting with Mihailovic did take place, albeit not at this time. This is one of the better chapters so I can live with this stretching of the facts.

I have to say that even within the bounds of historical fiction these errors did irritate. Some of the language also annoyed me, like the description of sub-machine guns as 'Tommy guns'; not a likely small arm in Serbia at this time! Which is a shame because the book is an enjoyable romp. So much so that I have downloaded the next in the series.

So, enjoy the story, even if we could wish the author had made a bit more effort with his research.