The Mask of Dimitrios

This is a bit left-field for this blog as I don't normally read much in the way of crime novels. However, 'The Mask of Dimitrios' by Eric Ambler is set in the 1930's Balkans and gives some background atmosphere to the period. A point drawn out by Mark Mazower in his modern introduction.  It is also a very good story, well written, and was made into a film in 1944. 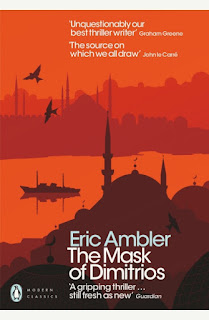 The story is built around a crime writer Charles Latimer who is shown a body, claimed to be Dimitrios, in an Istanbul mortuary by a Colonel Haki of the Turkish secret service. He decides to trace the story of Dimitrios, for interest and possibly as a story.

His journey takes him across the Balkans and onto Switzerland and finally Paris. Dimitrios was involved in various criminal activities including a political assassination in Bulgaria and an attempted one in Turkey. He was a man of the times; born in Ottoman Salonika, present at the evacuation of Smyrna during the Greek-Turkish War, and then across Europe like so many displaced persons.

I won't spoil the story and certainly not the ending. It remains an entertaining guide to a difficult decade.