An Osprey Campaign series book with Balkans in the title is usually a must-buy for me. However, there have been several good books on the Italian invasion of Greece in recent years. Unfortunately, this wasn't always so well covered. When I wrote an overview of the campaign in the SOTCW Journal, there was little other than the official history and Mario Cervi's Hollow Legions, in English at least. I had just come back from a visit to the battlefields from the Greek side and later did the same from Albania. 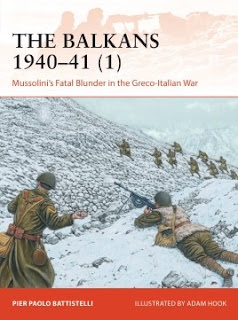 Pier Paolo Battistelli may not have added much to our knowledge of the campaign, but he has written a very readable account, profusely illustrated with really clear maps. These are the real strength of the book when dealing with a part of the world that will be unfamiliar to most readers.

As with other books in this series, the format is some context and a chronology, followed by a description of the commanders and the opposing forces. There has been a tendency to denigrate the Italian armed forces in WW2, and recent studies have put some balance back into the debate. However, the author points to the poor quality of the troops sent to Albania, many of whom had just been demobilised and were understandably less than enthusiastic about fighting in the Epirus mountains in winter! In March 1941, 4,600 of the 17,000 officers in Albania were replacements and only 800 career officers. These replacement officers were poorly trained in the latest weaponry and tactics.

It isn't well understood that the original Italian plan was a modest occupation of Epirus. Mussolini decided to expand the objectives to the whole of Greece on 14 October and was told it would require another 20 divisions and consequential delays. Moreover, the Greek army had its own problems, with half the army deployed to face its anticipated enemy, Bulgaria. The Metaxas line facing Bulgaria had modern fortifications, but there were only 50 machine-gun posts in Epirus.

The weather played an important part in the campaign, not least because it meant flying was only possible for short periods. This negated what should have been Italian air superiority. Intelligence was poor, and blue on blue attacks were not unheard of. Once it was clear that the Bulgarians were declining Mussolini's invitation to join in, the Greeks could shift divisions to Epirus, giving them parity of numbers with the Italians. By March 1941, the Italians regained their numerical advantage with 420,000 men deployed in Albania.

The outcome was a reversal of the initial Italian gains, followed by Greek offensives that captured much of southern Albania. That offensive eventually ran out of steam, and the two exhausted armies dug in. Only the German Operation Marita broke the impasse. The various stages of the war are clearly set out in the book with the accompanying maps.

If you are not familiar with this conflict, then this is the book to buy. But, even if you are, it is a useful addition to the library.

I have wargame armies for this conflict in 28mm and 15mm and have visited the battlefields. Both of which I would recommend. Zagoria is a beautiful part of Greece, and southern Albania is relatively unspoilt by modern tourism.