This is a history of the Earldoms of Orkney and Caithness in the far north of present-day Scotland from 870 to 1470AD by Barbara Crawford. It is unusual because, during this period, Orkney was part of Norway and Caithness was part of Scotland. This meant the Earls swore allegiance to two different monarchs for two halves what was administratively one lordship. Some years ago, I visited both these areas regularly as part of my job, and Orkney remains one of my favourite parts of Scotland. 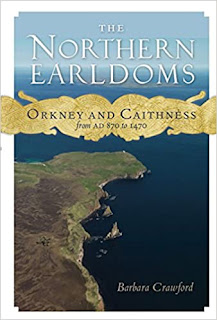 Anyone who has travelled from mainland Scotland to Orkney will understand that the Pentland Firth that separates them can be a rough strip of water. I have been delayed both ways by the weather. However, it wasn't a barrier to communication or settlement in a period when travel was mainly by ship. On the contrary, it was a vital passage for the Vikings who dominated these waters and one that they wished to control both coasts.

In the Viking era, possibly the most famous Earl was Thorfinn 'The Mighty', sometimes called 'Skullsplitter' or 'Raven feeder'. Either way, you get the message! He pops up in the story of Macbeth, and Crawford confirms that they fought each other, in contrast to Nigel Tranter's fictional story that they were allies. They battled on land in Caithness and at sea off the eastern mainland of Orkney. She also maps Thornfinn's pilgrimage to Rome across Europe, not by the sea, with Macbeth as Tranter postulates.

Despite the joint lordship, the military and administrative structures retained their Norse and Scottish features. The Earls, including Thorfinn, often held sway over larger territories, including the Hebrides off the west coast of Scotland and the Shetland Isles to the north, although the administration was less formal. They would provide ships and men for national campaigns as called for by the kings of Norway and, less often, Scotland. However, both earldoms were a long way from the centre of power in Scotland and Norway, which gave the Earls a bit of latitude. For example, they remained fairly detached from the Scottish Wars of Independence. On occasion, the Earls developed their own foreign policy, which could be regarded as treasonous.

The Norwegians were not big castle builders; in fact, it was unusual for the Norweigian aristocracy to have their own castles. There are a few castles in the Earldoms, but the surviving examples are from the latter end of this period. The introduction of Christianity brought ecclesiastical structures and some territorial disputes. Orkney and Shetland came under the Norweigian archbishopric of Nidaros. The outstanding building is St Magnus Cathedral in Kirkwall. This is a substantial building with a fascinating history. I once represented the caretaker (Jannie in Scots), who also did excellent building tours.

The book takes the reader through the history of the earldoms, highlighting the themes of divided loyalty and the growing authority of kings. This could cause difficulties for the Earls, particularly when the two countries were in conflict. King Hakon's 1263 attack on Scotland and the Battle of Largs is a good example. Fresh in my mind as my wife and I spent a day there last week.

Towards the end of this period, the Earldoms began to retrench as the Scottish kings began to assert greater authority. Sutherland, south of Caithness, was detached in 1200, and the Hebrides were brought into Scotland by Treaty after Largs. As the Viking Earls died out, they were replaced by related Scottish aristocrats, who maintained the dual allegiance but were part of a drift towards Scottish rule. By the late 14th century, the Sinclair Earls included a Chancellor of Scotland, who had substantial lands in southern Scotland. As the nation-state developed, it became virtually impossible to maintain dual oaths of allegiance. In 1472 Orkney and Shetland passed fully to the Scottish crown.

This is a substantial book with a level of detail that will probably only appeal to those interested in the area. Although, I recall quite a few Americans turning up in the archivist's office during the summer to track down their roots. As the Shetland fire festival Up Helly Aa demonstrates between January and March each year, the islands are proud of their Viking heritage. I don't think my liver has yet recovered from a visit during that festival!