The Siachen conflict has to rate near the top in the list of pointless conflicts. Once described as 'two bald men fighting over a comb'. The highest battlefield in the world, where casualties (2,700 so far) from cold-induced illness and accidents are far more common than combat. Sanjay Badri-Maharaj explains why a disputed ridge line holds such strategic significance for India and the fighting over many years, which has yet to be resolved. 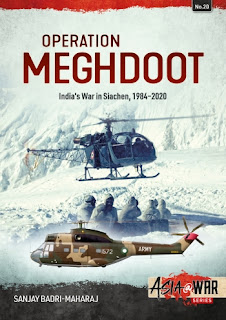 The Siachen Glacier is 700 square kilometres of ice mass situated in the eastern Karakoram Range of the Himalayas. The Saltoro Ridge above the glacier rises from 17,880 feet to 25,330 feet. Its strategic benefit for India is that it enables them to threaten the Karakoram Pass, a crucial artery between China and Pakistan. The borderline in this area was never demarcated adequately at the partition, and the author describes how an accidental map discovery started the Indian claim.

The book clearly sets out the background to the conflict and its particular challenges for the Indian and Pakistani armed forces. India has invested much more heavily in specialised equipment and formations. 102 Infantry Brigade, known as the Siachen Brigade, has 3,000 men, supported by 3rd Infantry Division assets. Battalions and special forces are rotated through the brigade to give many troops experience operating at these altitudes. Pakistan's X Corps is responsible for their units in the area, and again battalions and special forces rotate as necessary.

Both armies have purchased specialist equipment for the troops involved and support weapons, including mountain artillery. Resupply is a significant challenge as only a few helicopter types can operate at these altitudes and even then with tiny payloads. For example, the Indian Cheetah helicopter can carry only two soldiers and rations. The Pakistan positions are somewhat lower and can be supplied by the larger Puma helicopters.

Operation Meghdoot was aimed at pre-empting a Pakistani incursion based on intelligence that leave had been cancelled, lines of communication laid, high altitude equipment purchased and the tone of protest notes about Indian patrols. The plan was to establish a forward logistical base using a company plus one platoon of local Ladakh Scouts, then secure a position on the glacier and the ridge. This was launched on 13 April 1984 in minus 30 degrees celsius. Pakistan responded with its own Operation Ababeel. Serious fighting started on 22 June with Pakistani troops attacking uphill on an open ridge. This failed, and they lost 25 casualties. This was followed by a series of military engagements in 1985 and the years after that, with significant losses on both sides. After that, combat flared up infrequently, but both sides had to be prepared. The Kargil War in 1999 also impinged on the conflict as it could have cut on India's supply lines to Siachen.

Fighting has been rare in the 21st century, but accidents and medical conditions still result in casualties. Although both armies are now better equipped and trained to cope with the extreme conditions, albeit at a high cost. 12 Indian infantry battalions are rotated each year, which means some 15-20,000 troops have the joy of freezing up there. In 2012, the two countries came close to a demilitarisation deal, but it collapsed due to mutual suspicion. Tensions between India and China in the region is an added complication.

This looks pretty challenging to game on the tabletop for the wargamer, although the numbers fighting are quite small. For much of the year, the terrain is snow and ice, so a white mat over terrain would do. There are several WW2 ranges, particularly Finns and Soviets, in snowsuits, but they don't look much like the modern kit and the rifles are wrong. Possibly less of an issue in smaller scales, such as Pendrakens 10mm Finns. Korean War figures are another possibility, and from the photos in the book, troops don't wear snowsuits all the time. I have some way to go with my India-Pakistan project before I get to 1984 and beyond, so time to think about it.