This new book by Sanjay Badri-Maharaj covers one of the more obscure and frankly pointless conflicts of the modern era. The Kargil War between India and Pakistan was fought between 3 May and 26 July 1999 in Kashmir. The fighting took place on mountain tops, typically 5,000 metres high. 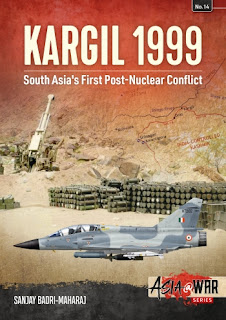 Skirmishing along the contested Line of Control (LOC) in Kashmir is commonplace. However, this was no skirmish. The Pakistan Army inserted a brigade-size group of their Northern Light Infantry and Mujahideen combatants across the LOC in Operation Badr. To eject them, the Indian Army deployed two infantry divisions (52 battalions) and 19 artillery regiments, plus air support.

Indian soldiers had to climb 16,000ft with packs weighing up to 25kgs in temperatures between -5 and -11C. At places, the attack was more akin to mountain climbing with ropes. The defenders were entrenched in sub-groups of 30-40 men and even rolled stones down on the attackers.

The initial assaults were rushed, not least because the infiltration was almost entirely missed by Indian intelligence, and senior commanders on the ground did not appreciate the scale of the incursion. This leads to heavy casualties before proper air and artillery support was organised.  By the end of the conflict, the Indian artillery fired some 250,000 shells, around 5,000 per day.

The book gives an outline of the conflict in Kashmir and the broader wars between India and Pakistan. Then a breakdown of the two armies in 1999, including detailed ORBATs and equipment. As usual in this excellent Helion Books series, it is profusely illustrated including colour plates. The rival air forces are also covered, although only a few Indian Air Force squadrons were deployed in this particular conflict. Both nations have nuclear weapons, and both sides prepared these for deployment and possible use.

The overall war plans of both countries are set out, before looking at the ORBATs for both sides in the Kargil area. This book is largely written from the Indian perspective, so Pakistan force deployments are speculative. The final chapters cover the battles for the mountain tops, again from an Indian perspective. They involved astonishing feats of endurance and bravery.

That bravery came at a cost. The Indian forces lost 1,714 killed, wounded and missing, plus two aircraft and a helicopter. Pakistan's losses have never been declared. The Pakistan Army named 453 soldiers killed in the sector during 1999, but that does not include the Mujahidin. As a former Pakistan Chief of the General Staff put it; "It had no purpose, no planning and nobody knows even today how many soldiers lost their lives". Even today, civilians on both sides remain displaced.

Given the entrenched views of both sides over Kasmir, the documentaries lack objectivity. However, they are worth a look on YouTube just to see the terrain.

It is likely that this won't be the last conflict on the 'top of the world'. Only a few days ago 20 Indian troops died in a clash with Chinese troops in the region. The wider conflicts are covered well, this time from the other side of the line, by Eric Margolis in his book 'War at the Top of the World'.