A Business of Some Heat

This is Brigadier Francis Henn's account of the United Nations Force in Cyprus (UNFICYP) before and during the 1974 conflict. As such, it provides a rare objective view of the conflict, albeit from an observer being shot at by both sides! 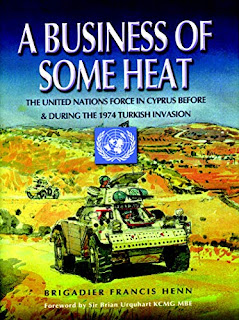 UNFICYP came into being in 1964 after the intercommunal violence of Christmas 1963. It started with a force level of 6,400 men from nine countries and varied over the years depending on the threat level. That threat stepped up a gear in 1964 when the EOKA leader, Grivas, returned to the island, adding his faction to the National Guard, supplemented by Greek regulars infiltrated into the island under the guise of 'volunteers'. The blockade and violent attacks on Turkish villages until 1967 left indelible marks which inevitably influenced future Turkish-Cypriot attitudes. Only US pressure stopped a Turkish intervention, other than air attacks, which were a clear warning of events to come.

The withdrawal of Grivas and the 'volunteers' after the 1967 crisis allowed for a period of relative stability and the reduction of UNFICYP to around 3,000 men in 1972. The author then sets out the structure of district commands and the functions of the force, which had its HQ at the Blue Beret Camp at Nicosia Airport. The Force Commander was an Indian infantry officer, Major General D. Prem Chand, no stranger to the challenges of inter-ethnic conflict.

The relative peace was shattered by the Greek-inspired coup in 1974, which resulted in the Turkish Government sending a task force to protect the Turkish Cypriot community. UNFICYP had no mandate to intervene but did its best to protect civilians. When a ceasefire (of sorts) was agreed they tried to maintain it. UNFICYP was reinforced by mainly British and Canadian units that included some light armour. The book also covers the actions of the British Government in reinforcing the British base areas on the island. The UN troops view of the competence and tactics of both the protagonists is interesting and rarely positive. They also highlight the indiscipline of some units and the organisational weaknesses highlighted by Erickson in his study. In particular, the Turkish shortage of radios below battalion level.

The most serious conflict came at Nicosia Airport when the force was instructed to hold the airport. As the British PM, Sir Harold Wilson, said, ‘I think within an hour of war.’ The prospect of British (and other) UN troops coming under Turkish air attack galvanised Whitehall. Orders were issued for immediate deployment to Akrotiri of 12 RAF Phantom aircraft and armoured and anti-tank units dispatched from the base areas. There was an interesting exchange between the Turkish battalion commander approaching the airport and a British officer, "Do not forget we have 12 RAF Phantom jets on call which are better than your Sabres and by themselves could destroy your battalion”. The intervention allowed time for the diplomats to get the Turks to call off the attack.

In the second stage of the conflict, up to the unilateral Turkish ceasefire, UNFICYP again sought to protect civilians and then reorganised as a buffer force. There was some attempt to investigate atrocities, although neither side cooperated. They also helped deliver humanitarian supplies.

The Cyprus conflict has never been resolved, and the UN remains in position, albeit at very low levels. The UN casualties had been severe in 1974 – a total of 9 men killed and 65 wounded. A small UN Force caught up in an all-out war between two armies had paid a high price. As the UN Secretary-General reported, "A peacekeeping operation, no matter how successful and efficient, cannot provide the solution of a political problem. It is only a means of keeping that problem under control, maintaining reasonably normal conditions of life for the people of the area, and creating a situation in which a lasting settlement can more fruitfully be sought."

This book may have more detail than the general reader might reasonably need. I found it a very useful resource, not least because it offers a different perspective on the conflict. Hard copies are difficult to find and expensive for this 2004 book, but there is a very reasonably priced (under £5) Kindle edition.