"Drazki", the legedary torpedo-boat that saw service in the Balkan Wars, and one of the most valuable exhibits in the Naval Museum in Varna, could collapse at any moment due to problems with the foundations. The cash strapped defence ministry is unlikely to come to the rescue so the museum has made an appeal to the citizens of Varna.

The "Drazki" was one of six torpedo boats ordered by Bulgaria. They were built in France, and transported overland in sections to Bulgaria, where the final assembly took place. "Drazki" was launched in the autumn of 1907, and commissioned in early 1908. During the Balkan Wars, "Drazki" entered fleet history after successfully, at almost point-blank range, torpedoing the Turkish cruiser Hamidie, and crippling her. "Drazki" is now the only preserved example of this class of ship, worldwide.

No details of how overseas donations can be made, but if I hear anything I will post. The museum is run by a group of enthusiasts who deserve support. 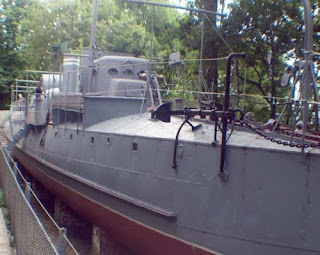