Club game this Sunday was a Salonika campaign scenario using Warhammer Historical The Great War rules. A British battalion against a mixed German and Turkish battlegroup. Both had cavalry and artillery attached.

Only played a few games with these rules so far - so learning as we go. They are very brutal. Units caught in the open don't last long, which is fair enough, so make sure your tabletop has plenty of terrain. Field guns are not that effective but mortars and heavy machines guns are. Close range i.e. within 12" rifle fire is as well.

Once we played a couple of turns the rules clicked into place and moved quickly. A 1000 point game lasted less than 3 hours so very playable. Next time out we will try an attack on a fixed position.

Some of my new units - Russians, Greeks and Italians didn't get on the table in the time we had, but I have put pictures on my Salonika page, with a taster below. 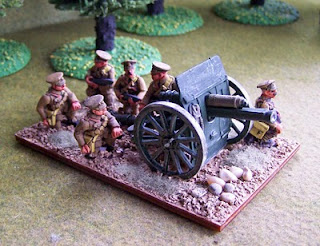 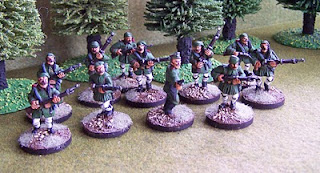 Russian Infantry
Posted by Balkandave at 20:28