A pal pointed me in the direction of this clip on YouTube that depicts the Russians storming Plevna during the Russo-Turkish War of 1877-78. It is taken from the film Turkish Gambit that is based on the second book from the Adventures of Erast Petrovich Fandorin series of novels written by the Russian author Boris Akunin.

Sometimes described as the Russian James Bond, I would describe him as more of an intellectual investigator. Either way the books are an excellent read, full of period colour and the Turkish Gambit is particularly good. I had no idea it had been made into a film. As there are sub titles I must try and source a copy.

There is an excellent museum at Plevna in modern day Bulgaria, complete with a wonderful panorama painting of the battle. On my last visit an English speaking guide was on hand to give a detailed explanation - first class and highly recommended. 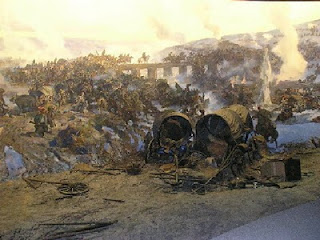 All this might even inspire me to dust down my 15mm armies for this conflict. Russian Guard below.