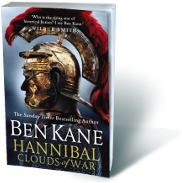 As with Ben Kane's other books, there is a close attention to historical detail without it slowing up the pace of book. It has all the elements you look for in the best historical fiction. The history, action, treachery and the personal interaction. Recommended.
Posted by Balkandave at 11:58