Master of War - Defiant Until Death

My holiday fiction reading has been David Gilman's, Defiant Until Death in his Master of War series.

This is the saga of Sir Thomas Blackstone, who rose from a humble archer in the English army of the Hundred Years War, to be knighted after the battle of Crecy. 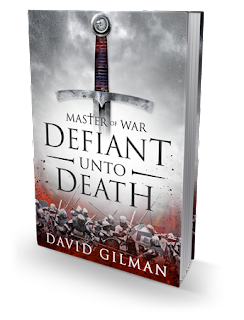 This book takes the story on onto the Poitiers campaign, with our hero holding towns in Normandy and getting involved in plots against the French king. This leads to his friends being butchered by the King and his family threatened by a character called the Savage Priest, who commands a band of routiers.

The climax of the book is the Battle of Poitiers, unusual for the period in that longbowmen played a less significant role in the victory due to a shortage of arrows - something few wargame rules replicate. It ends in a further battle in Northern Italy when our hero of course kills the Savage Priest. As Blackstone takes his band of warriors into Papal service, the next book will presumably cover Italian warfare of the period.

This is epic historical fiction. Numerous sub plots, some romance, plotting and of course plenty of action. Well researched and written, this is all you could ask for from the genre. Recommended.
Posted by Balkandave at 11:09