Taken at the Flood - The Roman Conquest of Greece

The second half of my poolside holiday reading was Robin Waterfield's history of the Roman invasion of Greece.

He starts with the Roman's early involvement in the Balkans, largely due to piracy on the Adriatic. This led to wars against the Illyrian's that led into Epirus, Macedon and mainland Greece.

Greece during most of this period was not the united entity of Alexander's time. It had reverted to warring cities and leagues of states that the Roman's carefully manoeuvred, as much by diplomacy, as by war. The author argues that Rome adopted a policy of remote control. Even when they defeated their opponents, they usually withdrew. It wasn't until the end of the period when Rome was in absolute control, not only of Greece, but Asia Minor as well, that direct rule with garrisons became a feature of Roman rule.

This book covers all the decisive battles of the period, Pydna, Thermopylae, Cynoscephalae etc. Perhaps not in the detail I would have liked, although there are sections on the armies and the legion v phalanx debate. The book is much stronger on the Roman strategy and its impact not just on Greece, which was economic ruin, but also on how the plunder and new wealth impacted on Roman society. Sowing the seeds of its own decline.

This is very readable book on a subject that has received less attention than the Punic wars. Recommended. 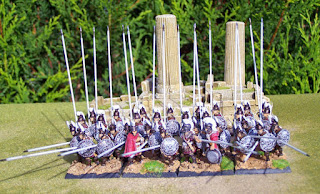