Boer War - onto the tabletop

I have managed a fair amount of painting over the holidays, although I have been a bit of butterfly, hopping between projects. One project I have finished, or at least got to a playable stage, is the Boer War. 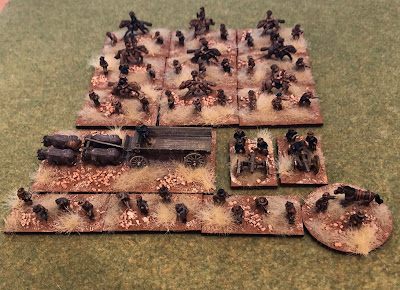 The models are all from the Pendraken range and very nice they are. The artillery is very fiddly at this scale and could do with better lugs for the wheels, but otherwise good.

Time for a tabletop test. I have enough painted figures for more than 60pts a side in my favoured 'Men Who Would Be Kings' ruleset. That is twice the normal army size for these rules. I gave the Boers their usual high ground defensive position and so took away a couple of units. 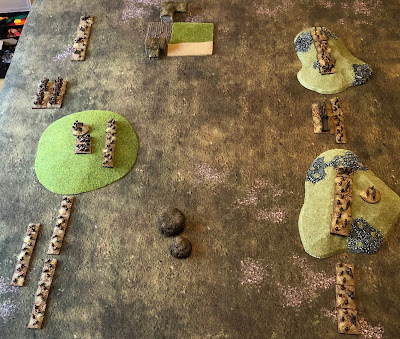 The rules delivered a historical result, with the Brits attempting a diversionary attack on the left with Imperial mounted infantry supported by lancers, while the main infantry attack went in on the right. The Boer sharpshooters were deadly, even at long range, and the attack quickly ground to a halt.


Lesson learned, even a 2-1 attack ratio on the right wasn't nearly enough. Now, where is that flank?

I still have plenty of figures to paint. The ambition is to get enough units for a Black Powder game. But for now, other projects beckon.
Posted by Balkandave at 11:59