I have just finished reading Philip Jowett’s book ‘The Bitter Peace: Conflict in China 1928-37’. This is a military history of China from the end of the Warlord Era to the full-blown war with Japan. 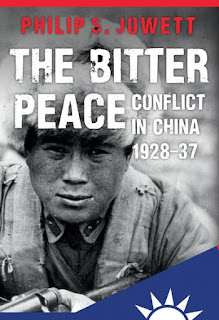 The Nationalist victory was supposed to usher in a period of peace for China. Instead, most provinces had endemic banditry, with up to a staggering 500,000 men in organised bands. Many of these fought over the opium trade as millions of Chinese were addicted to the drug during this period, forming the main source of warlord income. The other source of income was taxation of almost everything, often many years in advance, adding to the economic depredations of the ordinary Chinese.

Jowett takes us through each of the many conflicts during this period, which isn’t an easy read. They are mostly internal conflicts between the Nationalist government of Chaing Kai-shek and various warlords as well as his long-standing attempt to destroy the communists, subsequently led by Mao. The armies in terms of manpower were huge, but often poorly equipped and trained. Modern weapons including tanks, artillery and aircraft were supplied in a bewildering array of types, a quartermaster’s nightmare.

In addition, the Japanese were expanding their territory on the mainland, primarily in Manchuria, but also stretching those territories westwards. They also controlled ports, including Shanghai.

One conflict I was not familiar with was the Sino-Soviet war of 1929. The war started as a dispute over control of the Chinese Eastern Railway, which was seized by Nationalist troops in May 1929 and diplomatic relations were broken off in July.

The Chinese or Manchurian troops of the North-Eastern Army had around 200,000 men, with some units well equipped but others were armed with swords and spears. They also had locally made mortars up to 120mm calibre, as well as modern artillery and FT-17 tanks. The air force included 11 modern French Potez 25 light bombers. Much of the fighting was done by irregular cavalry and White Russian emigres.

The Soviet Far Eastern Army was rebuilding after the Civil War and had limited resources including 20 tanks and 20 armoured cars. The rifle corps started with around 30,000 men, but soon expanded to 60,000 and eventually to over 100,000 men. They had air superiority with around 70 aircraft and also used armoured trains.

August was spent skirmishing as the Red Army gradually eased its way into China. September and October saw fighting intensify along the strategic rivers including the Amur and Sungari Rivers – with both sides using gunboats and monitors. By October the war was focussed on the fortified town of Lahasausu, which fell to the Soviets after a short siege. The Chinese fell back to Fushin, which was also fortified and garrisoned with three brigades and the local militia. The assault here was tougher for the Soviets as temperatures fell to 11 degrees below and force 8 winds. They had to fight street by street, but they succeeded in sinking the remaining Nationalist ships, which gave the Soviets control of the rivers.

The final assault into Western Manchuria was undertaken by ten divisions aiming for the city of Chalainor and then swinging down the railway line. It was largely successful, and on 27 November the Red Army occupied Hailar, controlling the railway. On 3 December, Britain, France and the USA brokered a peace, which confirmed Soviet control over the railway.

I have a small Chinese Nationalist army in 15mm and their later Japanese opponents. I also built up Soviet forces in 15mm for the 1939 Nomonhan (Khalkin Gol) Incident. Some of these will be OK, although pictures in the book show Red Army troops who look more like the Russian Civil War, including the distinctive caps. Where is that Peter Pig catalogue!