Cold Start: The Next India-Pakistan War

I am not a big player of board games but I have a growing collection, partly for the excellent maps, and also because they give a strategic perspective that few tabletop games bring. Cold Start is a board game from Strategy & Tactics which simulates a modern-day conflict between the two nuclear powers. 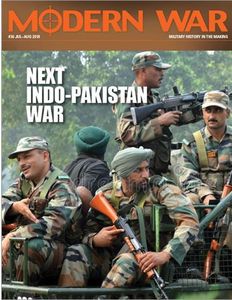 India and Pakistan have gone to war three times since Partition and engaged in many low-intensity conflicts. Both sides continue to face each other with large armed forces. The terrain in the border areas varies from the desert in the south, the rivers of Punjab, up to the mountains of Kashmir.

India's war strategy is called 'Cold Start', developed after terrorist attacks in 2001 showed how slow the army's mobilisation was. They now aim to achieve full mobilisation in 72 hours and then launch attacks across the border to capture key targets. The spear of the attack will come from three or four strike corps, which include armour and mechanised divisions.

Pakistan's 'Riposte' strategy involves two strike corps, which would seize Indian territory, or counter any penetration. Pakistan doesn't have much room to manage a defence-in-depth and it is heavily outnumbered by its larger neighbour. It does have a potential ally in China, who could intervene by inserting airborne troops into Pakistan and making limited strikes across their border with India. Ground communications between Pakistan and China are limited to one high-level road.

So, onto the tabletop. My main beef with board games is the fiddly counters and overly complex rules. In this game, you get a lovely map, which I will use for the earlier conflicts as well. The counters mainly represent divisions and the rules are very straightforward. 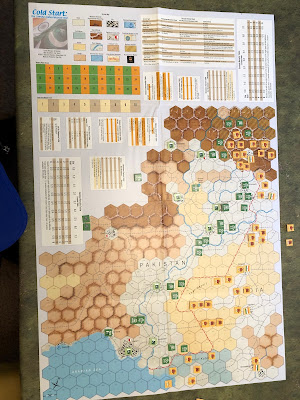 I played the Pakistan side. Suffice to say I didn't do as well as their cricket team is performing in the test match! It reminded me of playing late-war Germans on the eastern front. You dash around with armoured battlegroups desperately trying to firefight numerous incursions. Airpower can be pretty devastating as India almost always has air superiority. Just when you think you have pounced with more units on an Indian strike corps, the balance is wrecked by hordes of Indian planes.  Sadly, the Chinese didn't intervene either.

Despite my dismal performance, I really enjoyed this game. It certainly has that elusive playability and gives a real feel for the strategy of both sides. Another box of those lovely GHQ models has just arrived, so it will be back to 1971 soon.