The Battle of Kosovo

A new book (in this case a booklet) on the Battle of Kosovo is always likely to attract me. Not least because despite its mythical status in Serbia, we actually know very little about the battle fought between the Serbs and their allies and the Ottomans on 28 June 1389. 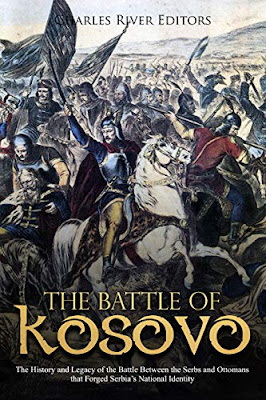 Sadly, this booklet adds little to our understanding of the battle, as it devotes only a few pages to the battle itself. Instead, we get a potted history of the Ottomans and Serbians up to the battle and something of its legacy afterwards.

An early claim is that the founder of the Ottoman dynasty, Osman, was the first in his tribe to convert to Islam. The author states that his father Ertugrul was not a Muslim. This will come as a surprise to those watching the TV series 'Ertugrul' on Netflix, as this depicts him, and his father Suleyman Sah, as pretty devout Muslims, albeit of the Sufist sect. I confess to flicking forward some of these lengthy scenes.

In fairness, we know very little about the early Ottomans and what we think we know is contested. However, Islam was very deeply entrenched in the Seljuk state that Suleyman's Kayi tribe fought with, and the idea that Osman discovered Islam well after this does seem a little surprising.

The account of the battle itself is fairly conventional with the usual discussion over how both leaders died. It does ignore the Albanian viewpoint, which is worth a read in Anna Di Lellio's book.  My short summary is on BMH along with pictures of the battlefield today, and further reading.

I can't say I would recommend this booklet. However, if you want an introduction to the period then it can be picked up very cheaply in the Kindle version.