This is a book by Trumbull Higgins on the Anglo-American controversy over the Italian campaign in WW2. Not easy to get a copy of this 1968 book this side of the pond, so much so that I now have two copies by mistake! So, if you want a copy, I am your man. 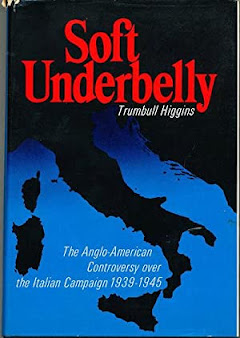 The phrase 'soft underbelly' is ascribed to Churchill, although there is no direct quote of him using it. Sir Alan Brooke refers to him using it and there is a story of him drawing a picture of a crocodile for Stalin and pointing to the soft underbelly. It refers to Churchill's preference for attacking Germany from the Mediterranean, either through the Balkans or latterly through Italy. In contrast, the Americans, General Marshall, in particular, viewed these campaigns as a distraction from the direct assault on Germany through France.

This book examines the campaigns and the debate between the Allies on this issue. Starting in 1939 with Wavell's view that "The last war was won in the West. The next war will be won in the Mediterranean". Higgins argues that this was also influenced by British memories of trench warfare on the Western Front in WW1.

On the other hand, Marshall consistently argued that an Italian collapse would not be decisive because attacking Germany through its mountainous southern flank was never going to be a viable option. The Allies strength had to be deployed on the accessible terrain of northern France.

It was the Torch landings in North Africa that sucked the Allied effort into the Mediterranean. Marshall argued that a theatre in being automatically obtains priority over one merely in prospect. So Tunisia led to Sicily, which led to the Italian mainland and southern France in Operation Dragoon. Not to mention Churchill's other diversions into the Eastern Mediterranean and his regular efforts to get Turkey to enter the war.

Higgins does point out that this was not simply an American v British issue. Key players on both sides took different stances at various stages. Marshall was not always supported by his political or military colleagues. Churchill was certainly opposed on a number of occasions. As Aneurin Bevan said in 1943, "The whole of this country wants to know what strategical conception behind the war put the British and American armies to fight their way right up the whole (Italian) peninsula in the autumn and winter ... Is that the 'soft underbelly of the Axis?' We are climbing up the backbone."

Higgins attributes Churchill's Balkan plans as a consequence of his failure at Gallipoli in WW1. I am less convinced that this was much of a factor. It is much more likely that Churchill, the old imperialist, was more interested in securing British interests in the Middle East and the Balkans after the war. As the conflict dragged on, his concerns clearly shifted to resisting the Soviets in eastern Europe. The end result was a totally unrealistic plan to reach the Danube before the Soviets as well as amphibious invasion of the Yugoslavian coast.

Higgins doesn't shy away from his own view that the American position was the correct one. However, he fairly sets out the different views. This is an excellent study of the controversy and well worth reading.