The Wars of the Roses

This book by Trevor Royle has been sitting on my to-read shelf for a few years. I have never really got into the Wars of the Roses since my very early teenage wargaming years playing a club campaign based on the board game Kingmaker. I was born in Lancashire, and my wife is from Yorkshire, so we have used the red rose - white rose theme over the years. However, the battles of the period itself always felt a bit of a slogging match. 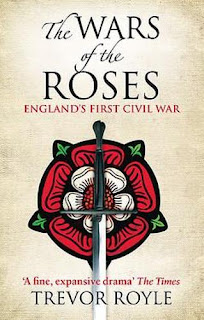 The first thing to say about this book is that it's really a history of the 15th century. We reach the opening Battle of St Albans in Chapter 11, around halfway through the book. That's more than introductory context, although still interesting.

The wars were by no means continuous. Royle describes them as "little more than a series of violent outbursts which interrupted periods of uneasy peace."  The armies were not large and often quite professional. They were made up from the retinues of the nobility, supplemented by mercenaries. The mass of the peasantry was rarely called up to participate in the fighting, although they could face the sharp end of pillaging. The other interesting fact is that the Lancastrian cause was not focused on Lancashire any more than the Yorkists were based in Yorkshire.

The Scots also got involved more often than I had appreciated. Taking advantage of the chaos to raid while supporting mostly the Lancastrian cause. They also maintained the Auld Alliance with France through most of the period.

This isn't a military history of the conflict, although the main battles are covered, and there is some discussion of the problems raising armies and maintaining them in the field. The focus is on politics, which are pretty complex at times. It's all very Game of Thrones with alliances shifting and some huge characters. Not just those who made it to the crown like Edward IV and Richard III, but also the players, including Warwick the Kingmaker.

It all came to an end at the Battle of Bosworth in 1485 with the death of Richard III and Henry Tudor's accession to the throne. I have also been reading the new Osprey campaign series book on the battle by Christopher Gravett, which covers the military aspects of the wars much better. 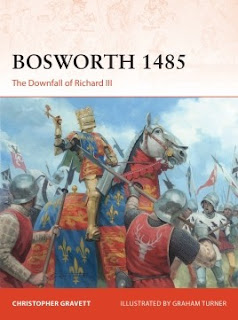 Here we get the commanders and their armies, together with their plans and the battle itself. As usual, there are some lovely colour plates and maps. I have visited the battlefield many years ago. Or, to be precise, what was thought to be the battlefield at the time. The latest archaeology puts the actual site a couple of miles away. Nonetheless, there is an excellent visitors centre.
Most of my medieval armies cover the earlier periods. I could probably field at least one army, but not both. So, I have decided to supplement the 15mm figures with some reinforcements from Peter Pig. They are true 15mm, so a little smaller than the oversize versions of recent years, but they look very nice.