I picked up this book in a second-hand bookshop a couple of years ago, and for some reason, it never made it to the top of the pile. A mistake because this is an excellent study of the White movement in the Russian Civil War. I have the 1987 edition, but there appears to be a reprint available. 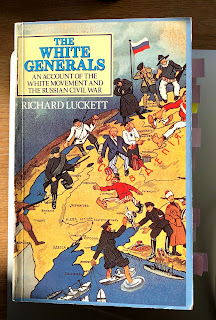 The first thing that strikes the reader of any aspect of Russian history is the country's sheer scale. The Imperial Russian Army, by the end of 1914, had mobilised 6,553,000 men. Even these numbers couldn't cover the entire front line, and in any case, there were only 650,000 rifles. The Russian soldier was brave but lethargic, and there was a shortage of trained NCOs. Despite the Tsar banning vodka at the start of the war, by 1916 drunkenness was as bad as ever. However, we should remember that the armies of the Allies were at breaking point in 1918, yet many Russian soldiers went on fighting until 1920.

This book looks at the different White armies and their commanders. The Whites' fundamental problem was the lack of a coherent command structure or even common grounds for fighting. There were Denikin and Wrangel in the South, the Ukrainians and cossacks fighting for independence, Admiral Kolchak and the Czechs (50,000 former PoWs) in Siberia, and the Finns in the North.

The Allies intervened and provided supplies and equipment without any clear strategy. Churchill sat in London with a big map on the wall without any real grasp of the distances involved. He argued for assailing the Bolsheviks on as many fronts as possible, completely ignoring that the Red Army had interior lines of communications. Nowhere was Allied intervention more pointless than the troops sent to Murmansk. There was little support for intervention at home, and often second rate troops were sent to 'enjoy' the Russian winter.

This was a conflict very different from the trench warfare of the Western Front. Cavalry came back into its own with huge cavalry armies, supported by the armoured train. The limited railway system became the focus of advances and retreats. Tanks and aircraft made an impact, mostly supplied and manned by the British.

In the end, it was Trotsky who forged an effective fighting force that was able to push back the disorganised White armies. His HQ train was the stuff of legend, dashing around from front to front. The Netflix series on Trotsky may not have been good history, but the civil war scenes give you a flavour of this. In contrast, the command trains of at least some of the White generals resembled an upmarket brothel.

The Allies tired of the intervention's effort and cost, which cost the British alone some £24million. Nobody knows how many died, but 25 million is a credible estimate. Many Russians were displaced worldwide, and the conflict influenced Soviet foreign policy for years to come.

I haven't got a specific Russian Civil war army, but I do have WW1 and Russo-Japanese War Russian figures. You could also use Germans, Austrian and even Japanese. They look a bit too smart and uniformed but will do. In 15mm, my rules of choice for this period are Bloody Big Battles. I dusted them down for a divisional level action. Peter Pig do a nice range if I was minded to expand...... 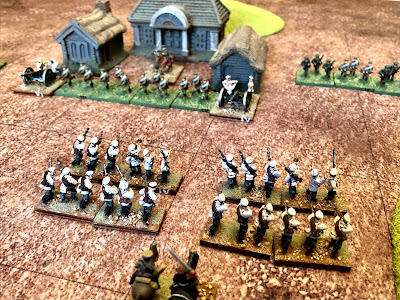 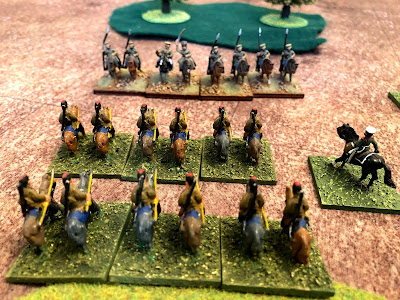