This is the latest in my Nigel Tranter re-read. The title is a bit misleading because while focusing on the remarkable legacy Queen Margaret (later Saint Margaret) left in 11th century Scotland, the book covers all the turbulent events of King Malcolm III's reign. 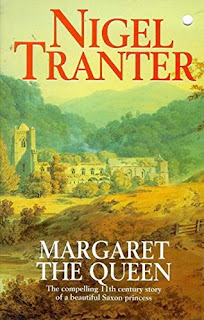 Later nicknamed Canmore (big head), Malcolm became King of Scots in 1058, probably after killing King Lulach (Macbeth's son). As usual for this period, the sources differ on many aspects of his early life and reign. His first wife was likely Ingibiorg Finnsdottir, the widow of Thorfinn Sigurdsson of Orkney.  Tranter has her dying, possibly poisoned by Malcolm, before he married Margaret. She was a Saxon princess and brother to Edgar the Saxon claimant to the English throne after the Norman invasion.

She appears to have had a remarkable influence over the warlike Malcolm, making significant inroads for the Roman Catholic church into Columban Scotland. Not that it stopped Malcolm leading at least five invasions of England. These were mostly large scale raids into Northumbria rather than serious attempts at conquest.

The arrival of the Normans in England changed the balance of power significantly. William came North and forced peace on Malcolm, who accepted William's overlordship. This would be a source of contention throughout the medieval period. Not that this stopped further confrontations between both sides.

When William Rufus became king on Williams death, a further peace deal was agreed. However, as Rufus consolidated his rule, he expanded his domain to include Cumbria, nominally Scottish during this period. After another raid into Northumbria, Malcolm was ambushed and killed near Alnwick in 1093. Margaret died soon after.

While most of the conflict was with the Normans, Malcolm also put down a northern rebellion led by Lulach's son, although, in practice, his rule in the far north was always limited. He also lost the Hebrides to Norway late in his reign.

Tranter tells the story through Maldred, a younger son of the Earl of Atholl. This is a common Tranter style. While church politics is a theme that runs throughout the book, there is plenty of action to keep the reader engaged.