This is Saul David's authorised wartime history of the Special Boat Service. He took over the project from Paddy Ashdown after he sadly passed away. With full access to the SBS archives, he has written an excellent history of the unit in its various forms during the Second World War. 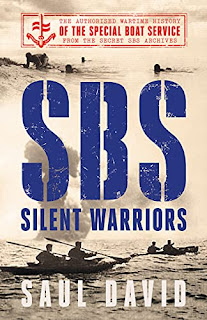 The title 'Silent Warriors' reflects the operations and recruitment policies of the unit. They operated in very small groups behind enemy lines, armed only with knives and small arms. While they did undertake sabotage raids, they also launched intelligence operations. They rejected the typical loud 'tough guys' attracted to commando units favouring quiet, tough, independent and problem solvers. This approach was started by the acknowledged founder of the SBS, Roger Courtney.

The early operations were typically undertaken in a folbot (collapsable canoe) carried in a submarine. These operations were carried out in the Eastern Mediterranean, hence my interest, including Rhodes in March 1941, which had an Italian and German garrison. A minor point, rarely mentioned in other studies of Allied troops, was the use of amphetamines to keep themselves alert. They did a good job, so by August 1941, the Folbot Section had become the Special Boat Section with 23 officers and 31 other ranks.

Saul does not duck other difficult stories. Such as the decision of Lt Cdr Miers, commanding the submarine HMS Torbay to machine gun enemy soldiers cast adrift in a rubber raft. It was one thing not to help the enemy adrift in the water, quite another to shoot them in a life raft.

One of the more famous early raids was the attempt to kidnap or kill Rommel. The job of the SBS was to get the commandos safely ashore. This was a role they would undertake many times, although later with much larger amphibious operations.

Their success led to the establishment of a Special Boat Section in the UK. Of particular interest to me because it was based just up the road from me at Seafield House in Ardrossan. It was later a special school run by Quarriers when I visited it for my job and had no idea of this part of its history. Sadly, the building was severely damaged by a fire after the school closed. 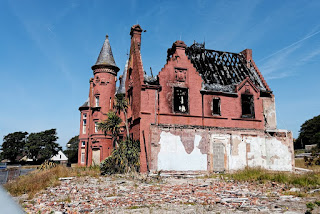 They even used a beach north of my home town of Troon for reconnaissance training. Sadly, the navy ignored their report of a sandbank because it wasn't on the Admiralty charts. As a result, three tanks were lost in a practice landing there for Operation Torch. Today's paddle boarders could have confirmed that!
This is not a small book (nearly 500 pages), but it must have been a struggle to omit the many stories he found in the archives. However, he doesn't overdo it, and the balance between the narrative history and the personal accounts is just about right. I particularly liked the story of the SBS team who helped bring out General Giraud from Vichy North Africa, before Torch. He shouted to the Catalina crew, 'He doesn't speak a word of English and he's nearly had me over the side about four times!'. To which Giraud said, 'Thank you very much, Lieutenant, that was very pleasant. I'm sorry I've been such a nuisance to you.'
A good example of intelligence operations was the work of the Combined Operations Pilotage Parties (Coppists). They provided beach intelligence for planning an assault and then acted as pilots during the actual landings. This required exceptional stealth as discovery could alert the enemy to the likelihood of a landing. There are many examples of these in the book, from North Africa to Sicily, and arguably most crucially in Normandy. Getting back to the submarine was particularly challenging. For example, one of the Sicily reconnaissance trips resulted in the canoeists having to paddle back to Malta, seventy miles away.
Later in the war, midget submarines (X-craft) were used in addition to folbots. The Navy also copied the successful Italian use of chariots subs. X-craft were used as D-Day markers, although the Americans rejected their use because of security concerns, with fatal consequences on Omaha beach. The story of the weather delay before D-Day is well known, but imagine having to spend that day underwater in a midget submarine. Their secret role was crucial to the planning and execution of Operation Overlord.
I was familiar with the SBS operations in the Dodecanese and the ill-fated Leros operation. Later in the war, the SBS sneaked into Portolago Bay, sunk three escort ships, and badly damaged two destroyers. The modern SAS regards Operation Sunbeam as their most successful WW2 mission. In one night, three canoes neutralised German naval strength in the eastern Aegean.
An added risk of being captured was being executed due to Hitler's infamous 'commando order'. In the far east, the Japanese beheaded ten survivors of Operation Rimau, an attempt to sink Japenese ships in Singapore harbour. The SBS, as part of the Special Operations Group in Burma, took part in 173 operations with modest casualties.
After the war, the SBS underwent various name changes before becoming the Special Boat Service in 1987, part of UK Special Forces. The ethos of stealth and discretion remains, and they acknowledge the work of their forefathers. Sadly, the government didn't always do the same. A sad note in the chapter on what happened to key SBS members after the war includes Bill Sparks. He had to sell his Distinguished Service Medal when his disability allowance was cut.
I really enjoyed this book, as you can tell from the length of this review. However, there is so much more in the book, which can be picked up at Sainsbury's of all places for a bargain price of £11.
SBS operations are complicated for the wargamer to use on the tabletop. In addition, our helicopter view makes stealth challenging to replicate. However, it reminds me that I should return to playing Cruel Seas. 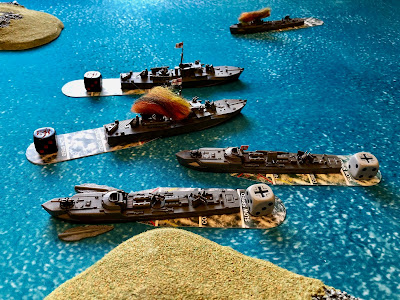