The Rise of the Turkish Defense Industry

This book will probably not make the general reader's Xmas list as it's a bit specialist. However, following my research for the Cyrpus 1974 project, I was interested to see how the story developed. Ayse Özer's book is just the job. 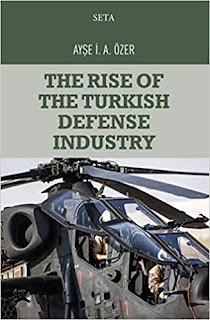 In 1964, the Turkish Government was warned off intervening in Cyprus by what has become known as the Johnson Letter. The US President was reminding the Turks that US-supplied equipment was only to be used for NATO purposes. After 1964, the US also refused to supply amphibious warfare equipment, so the Turks started their own shipbuilding for smaller landing craft and adapted foreign purchases for the larger ships like LSTs.

After the 1974 intervention, the Greek lobby in Congress successfully imposed a broader arms embargo that provided another spur for the Turks to develop their own defence industry. However, this didn't really take off before 2000 due to internal factors, and as Özer highlights, it was driven by other factors following the lifting of the US embargo.

The US embargo was a stern reminder that Turkey would not be protected if it did not own the means, particularly when its allies are not on the same foreign policy page. This was not limited to Cyprus. Turkish policy following the Arab Spring, the invasion of Iraq and the Syrian Civil War all highlighted differences. For example, the US armed the Kurds as the most effective fighters on the ground against ISIS, which would be greeted with horror by the Turkish military. Greece had been providing logistical support to the PKK since the 1990s, whereas the Turks regard them as terrorists. In addition, all the nations in the region were engaged in an arms race that Turkey could not ignore once its own policy started to face eastwards rather than solely to the west.

Even strategic partnerships with other countries have clashed with Turkish policy. Israel no longer provides weapons and technology unconditionally as it did in the 1990s, and western states have pulled projects due to human rights abuses in Turkey. For example, the new Turkish Main Battle Tank (Altay) is 95% Turkish supplied, but the power pack comes from abroad and cannot be exported to countries the EU regards as an undesirable end-user.

The current Turkish Government's 2023 Vision statement envisages Turkey designing and producing all of its military defence needs. If achievable, this would free Turkey from outside pressure and is viewed as part of building the economy. A concept known as Military Keynesianism, where military spending grows the domestic economy, providing skilled jobs. Turkey also aims to be a significant arms exporter through this policy. They also argue that military technology can drive innovation in the civil sector. For example, using military control systems in buses. As Turkey's overall GDP increased during the period studied, this doesn't appear to have a serious impact on social expenditure, a common issue for countries with high defence spending. Whether this can be maintained in the current economic crisis, remain to be seen.

This book probably won't appeal to the general reader, but it's a reasonably concise read and met my needs perfectly.