This is John Carr's study of Byzantium's struggle for survival 1057-1185. The Komnene dynasty lasted 128 turbulent years. The emperors were a mixed bag, and they all faced external challenges from the east and the west. And it wouldn't be Byzantine Empire without internal power struggles. 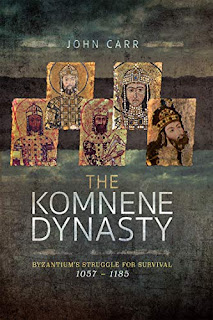 The name comes from the Thracian town of Komne, now in modern Turkey, although they had extensive landholdings in Anatolia. These lands formed the basis of their military strength, making them one of the great military families of the empire. The empire had to face assaults from the Turks in their eastern provinces and the Normans and Latins coming from the west. They also had to manage the First and Second Crusades that brought them into contact with some of the more rapacious elements of the European states.

Carr takes the reader chronologically through the different emperors, starting with the founder of the dynasty, Issac I. He was a military usurper who deposed Michael VI, a reasonably bloodless coup by Byzantine standards. We then get several fairly forgettable emperors until the main event, Alexios. He rebuilt the army after the disaster of Manzikert and demonstrated all the famed Byzantine diplomatic skills of playing their enemies off against each other and often incorporating them. Byzantine armies would include Norman knights and Pecheneg and Turkic horse archers. There is a chapter on the Varangian Guard, including Viking and Saxon adventurers. The recent University of Edinburgh supplement for Lion Rampant, Vikings in the Sun, covers this well.

We know quite a bit about Alexios because of his spin doctor daughter Anna. But even she is a bit light on why Alexios faced so many internal revolts. It was probably due to the need to maintain high military expenditure through taxation and centralising the state and army, depriving the military families of much of their power.

After Alexios, the Turks become a more significant challenge. Not yet the Ottomans, although the early foundations of that empire started during this period. Manuel I had to deal with the Second Crusade, and he made the big mistake of neglecting the navy. The empire's strength had been built on its strong trading position at Constantinople, but this required a strong fleet to protect the city and the trade routes. This failure culminated in the city's sacking during the Fourth Crusade, which is just outside this period. His death after a 37-year reign marked the beginning of the end. Endless wars and the onerous taxation to pay for the mercenaries who made up the build of the army, took their toll.

The bloodstained finale was the reign of Andronikos I. A man who would make any character from Game of Thrones look tame. It was mercifully short but exceptionally bloody. The dynasty had a twilight in Trebizond for some 250 years after the Latins captured Constantinople until the Ottomans finished the job.

I struggled a bit with this book initially, but that might be more to do with the less gripping story of the early Komnenes. However, Alexios' rule is always worth the telling, and I warmed to this version when we reached that period.

Onto the tabletop. I decided on Alexios against the Normans - a great story in its own right. Using To the Strongest! rules on the reduced size bases. I collected these armies in 28mm for a GDWS display game back in 2005. It didn't go well for Alexios. His right-wing didn't move for two moves allowing the Normans to storm across the table, while the Byzantine centre was left isolated. Such was the fate of a Byzantine emperor! 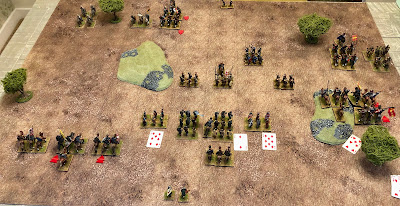 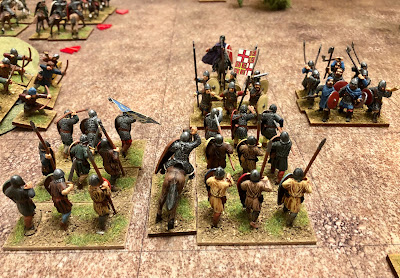 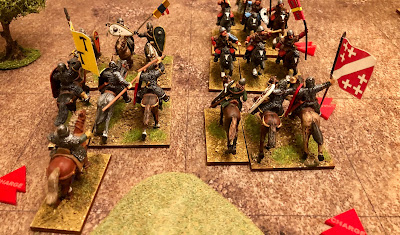 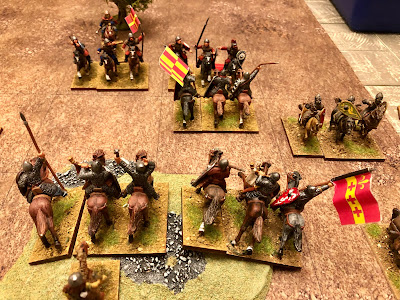