I have started to use my Game of Thrones armies for Lion Rampant as well as SAGA. This requires some additional troops for the standard 24pt army.

A box of Perry Miniatures, European Infantry 1450-1500 provides some 40 figures in a huge variety of combinations at outstanding value for money. The big downside of this variety is assembly, but Perry's are not bad and it didn't take that long.

The first unit up assembled and painted is a unit of pikemen. I settled for a simple one stage painting followed by army painter dip. This is quick and easy and produces a decent result. 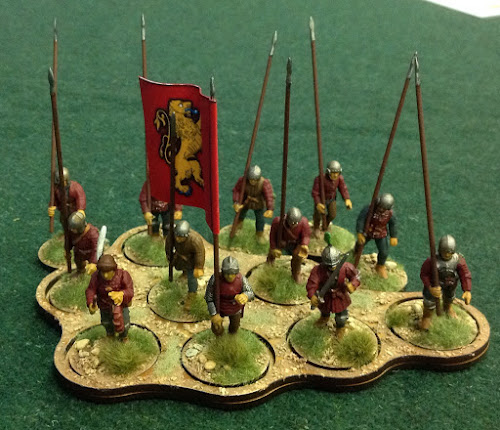 You can pad out a Game of Thrones army with almost any medieval figure, either as feudal troops or sell swords. I did that at the club today. Tywin Lannister and his unit of knights performed miserably in both games, but the new pikemen held their own. Some crossbowmen next I think.