Having finished the 1812 series, I needed some new bedtime historical fiction reading. Sticking to the Napoleonic theme, I went for Griff Hosker's Napoleonic Horseman series. The first book is Chasseur à cheval. Historical fiction about the French army is rare, although I recall enjoying Richard Howard's series of books based on a French dragoon. 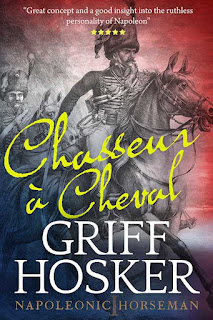 Our hero is Robbie Macgregor. Born in France, his great-grandfather left Scotland with Bonnie Prince Charlie after the failed 1745 rebellion. The family did not prosper in exile and his mother was taken in by the Count de Breteuil as his mistress. Robbie was the result and he grew up on the Count's estate.

The revolution resulted in the Count's execution and Robbie's mentor on the estate decided to rejoin his old regiment the 17th Chasseur a Cheval. Robbie went with him and also joined up. The regiment took part in some of the early campaigns of the revolutionary wars, including the storming of a Dutch fleet frozen on the Texel. Unlikely though this sounds, it did actually happen.

After the campaign in the low countries, our hero catches the eye of Napoleon Bonaparte and he ends up participating in several special missions and the Italian Campaign. While all a bit unlikely, it none the less makes a more interesting story than the routine war of patrols and outposts that was the actual lot of light cavalry in the French army.

The first book ends with the capture of Malta in preparation for the Egyptian campaign.

The book is written in the first person, which I found a little odd at first. At times it feels a little stilted, but you get used to it. The storyline has plenty of action and the revolutionary wars make a good setting. Hosker is an excellent and prolific writer, who rarely disappoints.

I don't have armies of the revolutionary wars, with the exception of the Egyptian campaign. The 17th regiment did actually exist, but only for a year and there are seven books in the series! So the author is using this unit a bit like Bernard Cornwell's South Essex regiment. Here are some of my 28mm French Chasseurs of the period. 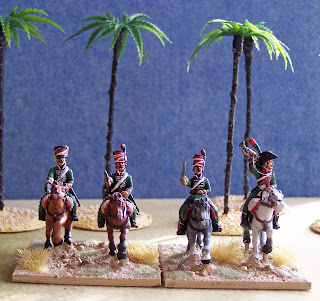