With impeccable timing, lockdown happened in the midst of decorators working in our house. I am now explaining to my beloved why my paintbrushes are a little on the small side for the lounge wall! Even worse, we sold off the old dining table in anticipation of a replacement, so I am without a wargames table for the moment.

Putting the house into shape even temporarily has taken some time. However, my Operation Budapest project is still grinding on, and I am procrastinating by still not getting stuck into those Russian riflemen. However, I have finished a squad of Romanian infantry, fighting for the Soviets during the campaign.

These are from the Great Escape Games range that I picked up at the York show last month. Really glad now that I made the effort to attend that show!

Romania was the third largest Axis power in WW2 - by 1944 they had 1.2 million men under arms. However, the army had structural problems, not least the social gulf between officers and men, a weak corps of NCOs, poor education standards, limited state mechanisation, and a brutal disciplinary system. Added to this were poor training, equipment and leadership.

Germany was unable to plug all of these gaps, or always keep the peace between Hungary and Romania. When Romania switched sides in August 1944, little assistance was provided by the Allies either. Artillery, anti-tank guns and tanks were typically obsolete and lighter than their counterparts.

The models are fairly large with good detail. Most have the 'Dutch' helmet, and I have kept a few with caps back for a planned Turkish WW2 project. The Romanian cap is similar and nobody does Turks. There was a lot of flash, which is surprising for a new range and I assume new moulds. There is little more irritating than finding bits you have missed when painting the detail.

Anyway, at least another 'Soviet' unit done. Now I must tackle those riflemen - although I did buy some Hungarian Hussars at York........ 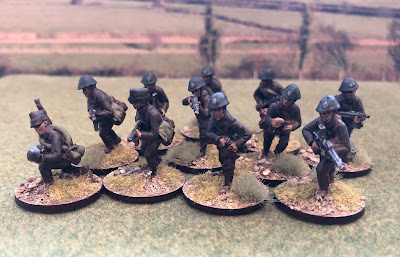