As normal life is being disrupted, one plus is my reading pile may take a bit of a dent. Napoleon's Guard is the second book in Griff Hosker's Napoleonic Horseman series. 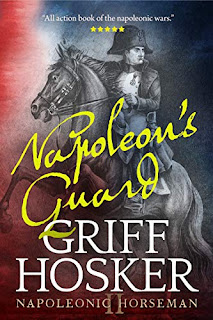 Our hero, now Captain Robbie MacGregor, is now in Egypt and his Chasseurs a Cheval regiment takes part in most of the early actions including the Battle of the Pyramids. I built up wargame armies for this campaign some years ago for a series of GDWS display games. I remember at one show Charles Grant telling the story of how he acquired pyramids at a garden centre, having been dragged out to a visit by his wife!

The regiment then marches north into Palestine and the siege of Jaffa, Acre and the battle of Mount Tabor. After retreating from Palestine, Napoleon defeats the Ottomans at Aboukir, with our hero taking part in the very unusual cavalry charge over the fortifications.

Our hero is then sent on a diplomatic escapade to Naples, where he meets Nelson and negotiates Bonaparte's exit from Egypt. This is based on a doubtful rumour that the British connived to get Napoleon back in France. If true, a decision much regretted afterwards!

The Chasseurs stayed behind in Egypt where our hero is present at the assassination of General Kleber in Cairo. Some treachery results in his regiment being destroyed, but of course, he escapes. Eventually getting away from Egypt and ending up in London. A visit to his ancestral home in Scotland was less than successful and he returns to London.

This book ends with his enlistment in the 11th Light Dragoons, on the understanding that he will mostly be employed on spy missions for the head of British intelligence. I fear that the 'Napoleonic Horseman' theme has somewhat lost its way here. Still a good read, but I will leave the series here to move onto new subjects.