I took a day off writing this week to play a game of Bloody Big Battles. An elegant ruleset that I should play more often allows battles to be fought on a grand tactical scale with 15mm figures. Having recently read Salvation and Catastrophe, a detailed study of the Greek-Turkish War 1919-23, I was keen to try that conflict on the tabletop. I was moved to action when the author of the Bloody Big Balkan Battles supplement for these rules (Konstantinos Travlos) kindly sent me a draft of a scenario he and his collaborator, Onur Buyuran, have written for the early stages of Battle of 1st Inonu.

The Greek-Turkish War 1919-23 attempted to expand the Greek state to include Greek populations in Anatolia, taking advantage of the Ottoman defeat in WW1. An army landed in the predominately Greek city of Smyrna (modern Izmir) and advanced towards the newly formed Turkish Grand National Assembly forces, led by Mustafa Kemal (later known as Ataturk). The Turks withdrew, causing the Greeks to extend and protect their lines of communication.

The scenario for this game deals with a reconnaissance in force by the Greeks to test the Turkish defences along the approaches from Bursa/Prusa towards Eski-Shehir on 28 December 1920 to 10 January 1921. I do like a centenary! The Greek force consisted of elements of two divisions, which were not ordered to occupy Eski-Shehir itself, instead the town of Inonu was the operational objective. The Turkish forces were commanded by Ismet Pasha (later to become the Turkish President and take this battle as his surname). The Turks had similar numbers of men but fewer machine guns and artillery.
This is the tabletop at the start of the game with the Turks entrenched on the east of the stream and the Greeks forming up in the west. The larger building on the nearest edge represents the Greek objective, the town of Inonu.

The Greeks were organised into two regimental sized battlegroups, which aimed to break through the gaps on either side of the high ground. The initial Turkish defence fire was dire, while the Greek artillery immediately caused heavy casualties and disrupted the Turkish units. This set the tone for Turkish dice rolling throughout the game!
This offensive fire allowed the Greeks to capture the villages of Kovalka in the south and Bozoyuk in the north without even having to mount an assault. 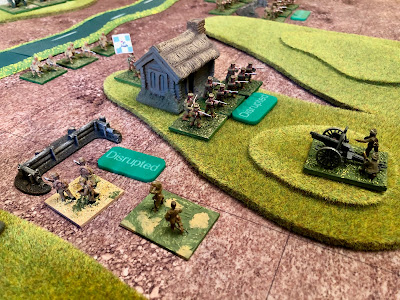 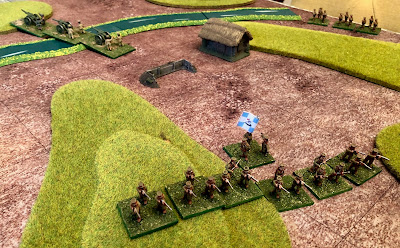 The Turks improvised a second line of defence in the north and dug in around the town of Inonu. The heavily outnumbered scratch force in the north held on for a couple of moves, but Inonu's defenders quickly collapsed. 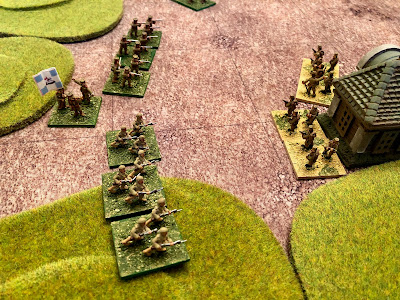 Objective secured for the Greeks by move 6 of 8. The scenario provides the chance that Turkish reinforcements could arrive in move 7 or 8. Needless to say, the dice said No! 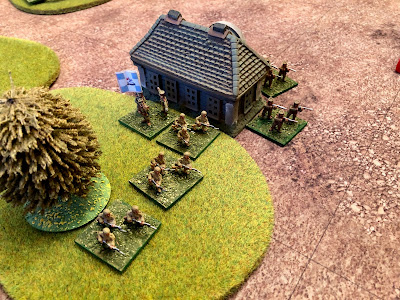 Complete victory for the Greeks by the end of move 8, who will be celebrating with the captured raki stores in Inonu tonight. 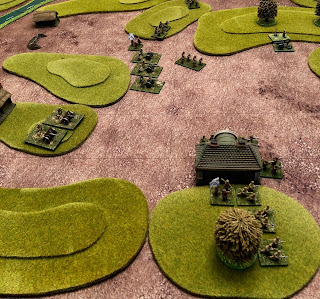 I hope Konstantinos and Onur are working on the Battle of 2nd Inonu. The President is not likely to want to adopt this battle as his surname without a chance for a comeback!
While it was a walkover for the Greeks, the scenario is actually pretty balanced. With a bit more luck, the Turks could have held their initial positions long enough to allow the Turkish reinforcements to arrive. The authors have made a few tweaks to the rules for this conflict, largely to take account of the terrain, artillery deployment, and the use of machine guns. These look about right to me and it was an enjoyable game.
Posted by Balkandave at 17:42