Spies of the Balkans

Spy fiction is not my usual genre, but needless to say the title pulled me in. The setting is Salonika at the outbreak of WW2, always an interesting city, and like Istanbul was something of a nest of spies during this period. 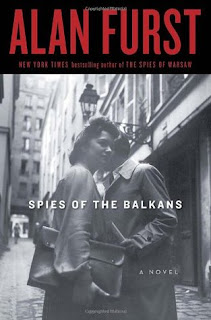 Our hero is Costa Zannis, a senior police detective, although his unit operates a bit like Special Branch in the UK. In essence, he deals with politically sensitive crimes and keeps a watch on espionage. Greece in 1940 was regularly visited by very fit young Germans, who had an extraordinary photographic interest in infrastructure and military facilities!

This was the period of the Metaxas dictatorship, so freedom of speech is very limited, although that falls to another agency. His personal life can be a bit complex and exotic. Not all the spies are German. His lover is a British spy and others operate in the city.

He is also an army reservist and spends a bit of time in a communications role after the Italian invasion.

He gets involved in an escape line for Jews from Germany. Salonika had a significant Jewish community in Ottoman times, welcomed there after they were expelled from Spain. He uses his contacts in Hungary, Yugoslavia and Bulgaria to facilitate the escape line. The British prevail on him to use it to get a British airman (who has knowledge of radar) from Paris to Salonika.

I won't spoil the finale, but it involves some new love interest as the panzers roll south.

This is a really good read and an interesting setting. Sadly, his other books don't appear to follow the story on. Modern day Thessalonika is well worth a visit, not least for its military museum.