This is the latest in James Wilde's historical fiction series based on Hereward the Wake. We don't have good primary sources on Hereward's life, but he was part of the resistance to William the Conquerer's occupation of England after 1066. He was based in the fenland of the east of England around Ely.

After monks betrayed a route into Ely to the Normans, the revolt was defeated. It is not clear what happened to Hereward. He may have continued the guerilla struggle or made his peace with William. The alternative as proposed in this book is that he left England, like so many Anglo-Saxon lords, and found his way to Constantinople. 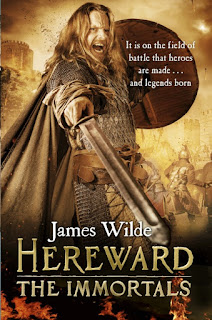 Hereward and his warband didn't have the resources to join the Varangian Guard, so they signed up as mercenaries. They get drawn into the plots and counter-plots that bedevilled the Byzantine Empire of the period. The main element of the story revolves around the Norman adventurer, Roussel de Bailleul. He is another of those interesting Normans who left his native land to find fame and fortune in Italy and then the Byzantine Empire. He was a mercenary commander sent to defend the borders, only to establish his own mini-state based on the modern-day Turkish capital of Ankara. He backed a usurper for the throne but the sneaky Byzantines paid the Turks to attack and capture him.
In this story, Hereward is sent to rescue John Doukas with a Byzantine elite unit called the Athenoi or Immortals. This unit includes one Alexios Comnenus who would go on to become one of the more able Byzantine Emperors, but that is another story. The History of Byzantium podcast is currently covering his life and times and is well worth a listen.
As usual, I won't spoil the plot, but it is a great story well told. I enjoyed the first in this series but found the next a little hard going. However, this is a great page-turner with everything you could want from historical fiction. I do hope he develops this story further.
It also inspired me to get out the Saga battle boards and fight a couple of skirmishes based on the book. I used the Age of Crusades supplement, with the Normans taken from the Crusader list and Hereward inserted into the Byzantine list.
And more from the game. It ended badly for the Normans! 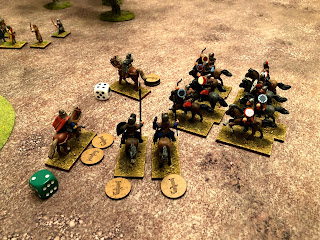 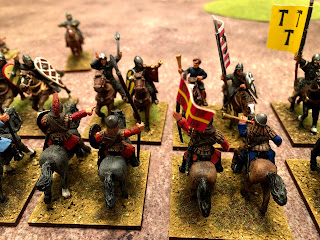