No, I haven't misspelt the wily Russian irregulars, this is the planning team for Operation Overlord, Chief of Staff to Supreme Allied Commander (COSSAC), led by Lt. Gen. Sir Frederick Morgan. This is a fascinating study by Stephen Kepher of one aspect of military operations we often forget about, the planning staffs. 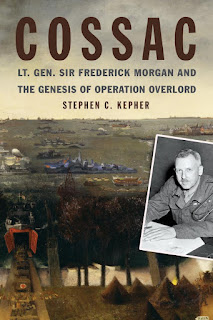 Frederick Morgan is not a General most will have heard of, largely because he was the backroom planner for Overlord. He was appointed to head up a joint British and US team when the operation was only agreed in principle, and even then there was considerable debate over the wisdom of launching a cross channel invasion. Churchill and the British favoured tightening the ring around Germany, whereas the Americans favoured the direct approach across the channel. This meant that not only did Morgan not have a Supreme Allied Commander to be Chief of Staff for, but no guarantee the operation would be launched at all.

The operations in the Mediterranean meant that sufficient landing craft and other resources could not be brought together before the spring of 1944. Even then Churchill, in particular, kept pressing alternatives. This caused Morgan difficulties as he commanded an Allied staff while remaining a British officer. On one occasion Americans in Washington, talking over a secure line to compatriots in London, exhorted their colleagues: “Don’t tell the British for God’s sake.” Which provoked laughter from the London end of the line as “every word had been keenly listened to by two British generals and one British admiral.” Building trust among COSSAC’s staff was among Morgan's highest priorities.

Morgan's team was initially a handful of staff in borrowed offices in Norfolk House, London. His deputy was an American, Ray Barker, and they soon developed a close working relationship. In fact, one of Morgan's key strengths was the ability to get on with almost everyone, a key component of coalition warfare. By December 1943 COSSAC had reached a strength of 1,103. When it morphed into SHAEF, it grew even further. On 12 July 1944, Eisenhower’s headquarters had 4,914 people and by 1 April 1945, the headquarters totalled 14,028.

This book takes the reader through the development of COSSAC and the various iterations of Operation Overlord. The military and political battles to get a workable plan that everyone signed up to are covered in some detail. As the author concludes, "Although Morgan was stationed behind a desk and not on a battlefield, he was a most effective leader at a most critical time for the Allies in the struggle against Nazi Germany."